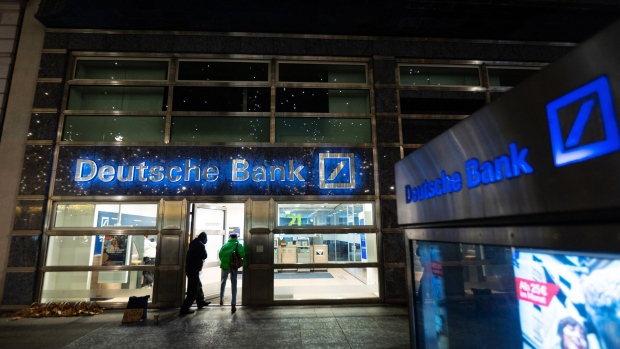 Customers enter a Deutsche Bank AG branch on Black Friday in Berlin, Germany, on Friday, Nov. 25, 2022. The recent wave of relief across the retail industry is giving way to a sense of foreboding ahead the holiday shopping season. Photographer: Krisztian Bocsi/Bloomberg , Bloomberg

(Bloomberg) -- Deutsche Bank AG doesn’t need warnings from its regulator to dial back the risk it faces in leveraged loans, its top executive said, adding to a chorus of bankers pushing back against what they see as excessive interference.

Germany’s largest lender has taken steps over the past 12 months to adjust the business to an increasingly challenging environment, Chief Executive Officer Christian Sewing said at a conference Wednesday. Bloomberg reported last week that Deutsche Bank is among a handful of institutions facing tougher capital demands for such loans.

“It does not need at Deutsche Bank in my view a regulator telling us how to reduce and what to do,” Sewing said at the conference hosted by the Financial Times. Bankers and “risk managers in Deutsche Bank have done a wonderful job to contain and make sure we have a book where we are in absolute control.”

The comments underscore the increasing tensions between the region’s lenders and the European Central Bank. Executives have been expressing frustration over the regulator’s approach, with the chairman of France’s Societe Generale SA writing to the central bank in October to protest against officials’ requests to be present in bank board meetings.

The planned capital add-ons for banks are “due to substantial deficiencies in their risk management frameworks for leveraged transactions,” Andrea Enria, the ECB’s top bank oversight official, said in testimony to European Parliament on Thursday. He didn’t name any banks.

While Sewing said that Deutsche Bank will adhere to orders by its regulator, he warned that there can be indirect effects for the economy if the funding of companies is disrupted.

“It’s not only the direct leveraged lending,” Sewing said. “It also affects under this rule financing the midcap business” in Europe, which is “the backbone of the economy,” he said.

Sewing has become an important voice for the banking industry as president of one of Germany’s leading banking lobbies. He added the top role at the European Banking Federation last week, putting him in charge of a pan-European trade association.

That role has made him a key critic of European regulation. He’s been particularly outspoken against efforts by the ECB to rein in leveraged lending by European banks, recently calling the measures “punitive” for the affected banks.

“I would appreciate if we have a global rule because I think that the ECB rules are a little bit different than those by the Fed,” Sewing said at the FT Global Banking Summit. That’s “from a competitive point of view something which can negatively impact us.”