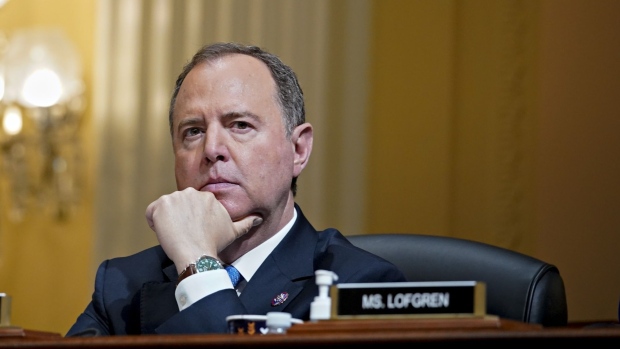 Representative Adam Schiff, a Democrat from California, during a hearing of the Select Committee to Investigate the January 6th Attack on the US Capitol in Washington, D.C., US, on Tuesday, July 12, 2022. Whether far-right extremists who attacked the US Capitol were encouraged by or even conspired with then-President Donald Trump will be the subject of today's hearing by the House committee investigating the riot. , Bloomberg

(Bloomberg) -- Senate Intelligence Committee leaders made a bipartisan request to the US government for classified documents the FBI seized in its search of former President Donald Trump’s home, signaling growing pressure from lawmakers for details on the materials.

Senators Mark Warner, a Democrat who chairs the committee, and Marco Rubio, its Republican vice chairman, made the request to the Justice Department and the Office of the Director of National Intelligence, while “recognizing the need to protect an ongoing criminal investigation,” a spokesperson for Warner said Sunday.

They asked the agencies to provide the panel “with the classified documents that were seized in the search of Mar-a-Lago, and an assessment of potential risks to national security as a result of their mishandling,” spokeswoman Rachel Cohen said in a statement. Axios reported on the letter earlier.

It’s the latest reverberation from the Aug. 9 FBI search at Trump’s resort in Florida, which has touched off political recriminations and added a new element of unpredictability ahead of the US midterm elections in November. Documents taken away from Mar-a-Lago include some with the US government’s highest secrecy rating of “top secret/sensitive compartmented information,” according to a search warrant inventory unsealed Friday.

“And the idea that 18 months after the fact Donald Trump could simply announce, ‘Well, I’m retroactively declassifying, or whatever I took home had the effect of declassifying them,’ is absurd,” Schiff said on CBS’s “Face the Nation.”

Trump said Friday that everything taken by federal agents at his Mar-a-Lago resort on Aug. 8 was “all declassified” and “they didn’t need to ‘seize’ anything.” Some of the former president’s supporters have claimed he has the power to declassify documents on his own.

While a president can request or initiate a declassification, the original classifying agency “must undergo a process to complete the declassification,” according to former federal prosecutor Barbara McQuade.

Schiff said it is yet to be determined if “there was any effort during the presidency to go through the process of declassification.” “I’ve seen no evidence of that, nor have they presented any evidence of that,” he said.

Based on the warrant, prosecutors indicated they are exploring possible violations of the federal Espionage Act among other allegations.

In Trump’s latest response to the search on his Truth Social platform, he argued that the documents were covered by attorney-client privilege or executive privilege and shouldn’t have been taken.

Fox News earlier reported Trump’s team “was informed” that some boxes and documents were covered by attorney-client privilege. Citing sources it didn’t identify, Fox also said some records could be covered by executive privilege.

In June, at least one lawyer for the former president signed a statement declaring all of the classified material stored at Mar-a-Lago was returned to the government, the New York Times reported Saturday, citing people with knowledge of the document.

The written declaration came after Jay Bratt, a senior official in the Justice Department’s national security division, visited Trump’s residence on June 3, the Times said. The statement could mean Trump or his aides were not fully forthcoming with federal investigators about the material being stored at Mar-a-Lago, according to the report.