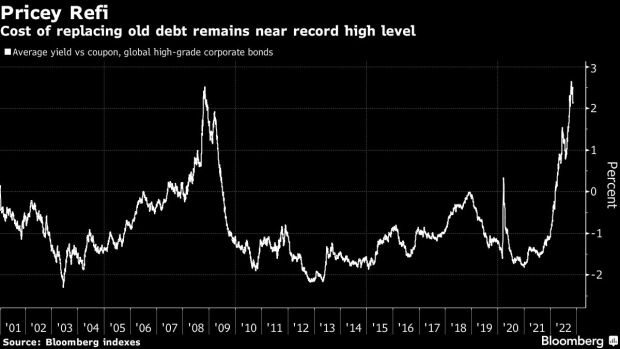 The Adler Group SA Uberlin luxury apartment construction site in Berlin, Germany, on Tuesday, Nov. 2, 2021. A major landlord in Germany, Adler has aggressively sold assets to help prop up its balance sheet, putting about 40% of the company’s portfolio on the block. , Bloomberg

(Bloomberg) -- The check for more than a decade of cheap corporate borrowings is coming due.

In less than 24 hours, petrol forecourt business EG Group and German landlord Adler Group SA told investors that they are weighing the sale of assets to cut debt, while gaming company 888 Holdings said it may tap the credit markets to manage its liabilities.

“Deleveraging is absolutely a top priority for the group,” 888 Holdings Chief Executive Officer Itai Pazner said at the company’s capital markets day on Tuesday. “In the longer term, this will mean prioritizing reducing debt over all other opportunities,” Chief Financial Officer Yariv Dafna added.

The unprecedented pace of central bank interest-rate hikes means raising new money to pay back investors in existing bonds has rarely been more expensive for borrowers. To make things worse, a slowing economy means that companies may struggle to maintain sales as they pass on cost increases to customers.

“We expect leverage metrics could worsen in the coming months as margins decrease and earnings see pressure from a more severe recessionary environment,” ING researchers Jeroen van den Broek and Timothy Rahill wrote in a report earlier this month.

“Inflation, rising energy prices, recession and higher funding costs are all contributing to a perfect storm in which corporate margins and earnings will undoubtedly be put under pressure,” they added.

Those dents to balance sheets make it more attractive to cut leverage by buying back bonds or selling assets, especially given the rise in borrowing costs.

A company would have to fork out more than $2 million extra each year for every $100 million of debt it’s replacing, according to a global investment-grade gauge. As recently as March, firms would actually reduce their annual bill when replacing old bonds with new.

888 Holdings warned on Tuesday that worsening economic conditions are affecting its operations and that growth rates are moderating. It’s also been hit by higher than expected debt following the acquisition of William Hill.

It may need to tap the debt markets to repay £347 million ($417 million) of bank loans, according to a statement, allowing it to switch from variable rates to a fixed coupon.

“Refinancing some expensive debt would be a relatively easy early win, otherwise 888 Holdings has something of a slog ahead to deliver on the integration,” Peel Hunt analysts including Ivor Jones wrote in a note.

EG Group, meanwhile, is exploring a range of deleveraging options as it seeks to refinance its $9.1 billion debt mountain. Two thirds of the company’s debt is floating rate, according to Fitch Ratings, meaning it’s been hit by the surge in borrowing costs this year.

The company owned by the entrepreneur Issa brothers and TDR Capital is considering options including cutting investment, disposing of non-strategic assets and selling part of its $10 billion real-estate portfolio.

“Asset sales are an option” for companies needing finance “but they have to be separable and non-core to your business, said Clark Nicholls, a senior portfolio manager at Axa SA.

Some companies, like French supermarket group Casino Guichard-Perrachon SA “have been doing it for years to deal with their heavy debt structures, but it can be a hit or miss depending on how the sale goes,” he said.

The very factors causing firms to look at selling assets mean getting deals done can now be a struggle.

German landlord Adler Group SA, for example, plans to focus on Berlin as part of a new strategy agreed with bondholders. That means selling thousands of apartments.

“Investors are extremely cautious in underwriting the current market environment,” according to a company presentation on Tuesday, “resulting in a transition from fear of missing out as seen in previous years into fear of moving first.”

--With assistance from Tasos Vossos, Steven Arons and James Cone.