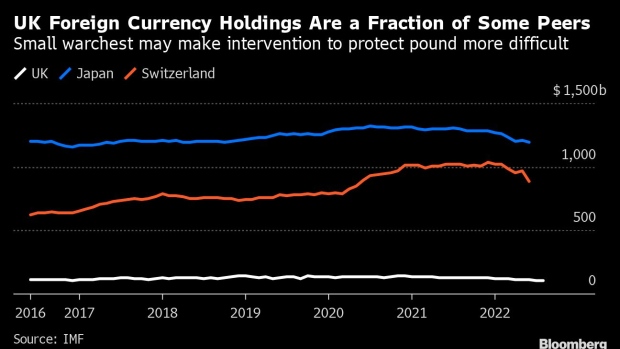 Commuters pass the Bank of England in London, UK, on Wednesday, Sept. 21, 2022. The Bank of England on Thursday is set to raise interest rates and start selling assets built up during a decade-long stimulus program, a historic tightening of monetary policy designed to clamp down on inflation. Photographer: Jose Sarmento Matos/Bloomberg , Bloomberg

(Bloomberg) -- With UK markets in the grip of dramatic swings, the Bank of England is coming under increasing pressure to act. The problem for Governor Andrew Bailey is that his options are limited, and all carry risks.

Conservative lawmakers, former BOE officials and City analysts have all called for emergency intervention to calm market nerves, but so far the central bank has remained silent. The institution has yet to decide whether to make a statement, though it is watching the market closely, according to someone with knowledge of the situation.

“There are no good choices for the Bank,” Evercore’s Krishna Guha wrote in a note on Monday. “We think the bank would much prefer not to make an inter-meeting move, which might fall short and backfire, and will see first if the government will move or markets might find a near-term floor.”

Here’s a look at the potential avenues available to the BOE to address the rout, which followed the new government’s plan for widespread tax cuts. The pound dropped to an all-time low and bonds plunged as traders increased bets on BOE interest-rate hikes.

The most straightforward, short-term option, would be a statement of reassurance to markets, and the country, from Bailey or the BOE, similar to that made by former Governor Mark Carney the morning after the Brexit vote in 2016.

Sky News reported that could come as soon as Monday. Such a statement could be made via a television address or a written statement. Former BOE policy maker Adam Posen has suggested the governor should say “publicly by mid-week” that if sterling is down, interest rates will go up.

If Bailey doesn’t speak, the job could be given to one of the BOE policy makers speaking this week. The most likely candidate is chief economist Huw Pill, who speaks on Tuesday. The question is, with markets still volatile, whether words alone will work.

That may put an emergency rate hike on the table. Calls for such a move began at the end of last week, and have gathered pace since. The BOE has hiked rates to 2.25% this year to control inflation, with the most recent move coming before the day before Friday’s fiscal statement, but it has faced accusations of failing to move fast enough.

Money markets now expect 200 basis points of rate increases by the BOE’s next meeting in November, more than triple the size of its last hike. Bets of that size could imply hedging against an immediate move.

The risk of an emergency move is that it adds to the sense of panic in markets, particularly if it fails to stem the losses. The BOE may also prefer to refrain from such a move to avoid explicit criticism of the government’s policies, according to Bloomberg Economics’s Dan Hanson.

“The big issue with an emergency hike now is that it would have to be 200 basis points to work because the market already prices in material odds of 100 basis points,” said Rishi Mishra, an analyst at Futures First.

The BOE’s reaction may be complicated by the summer of criticism the central bank received from the politicians now in power. Prime Minister Liz Truss had suggested during her campaign for the leadership that she would review the bank’s mandate, though Chancellor of the Exchequer Kwasi Kwarteng has since said the government is committed to BOE policy independence.

One possible response to the bond market moves is for the BOE to delay its planned sale of the gilts it bought under quantitative easing. That process is due to begin next week.

However, that may be seen as flying in the face of attempts to keep a lid on inflation, and also go against previous guidance.

The BOE has said there would be a “high bar for amending the planned reduction in the stock of purchased gilts.” It’s also previously indicated that the conditions refer to the functioning of the market. Gilt trading was orderly on Monday despite the heavy losses across the curve.

“In judging whether that bar was met, the Financial Policy Committee would also have a role through its assessment of financial stability,” officials said last week.

Another option for the UK would be to intervene directly to prop up the pound. However, the UK’s foreign-currency holdings are a fraction of the huge stockpiles that may be needed, making the job more complicated.

The UK had $108 billion in foreign-currency reserves at the end of August, according to data from the International Monetary Fund. Japan, which intervened to support its currency last week, had $1.17 trillion.

“Currency intervention would only be a solution for a few minutes,” Jens Nordvig, founder of New York-based research firm Exante Data, wrote on Twitter on Saturday.

The final option is to let the market reaction play out and save any policy response until November. That would give Kwarteng and Truss time to launch their own attempt to reassure investors about their plans.

Gerard Lyons, an external adviser to Truss, said Monday that while the BOE needs to act on rates, Kwarteng must do more to reassure markets about his vision for the economy.

“He needs to reaffirm that tax cuts are only part of the story, not the full story,” the economist said Monday in a Bloomberg Radio interview.

“Markets were still not convinced that his fiscal easing was necessary, non-inflationary and affordable,” he added. It’s quite clear from the market reaction that those concerns were not fully addressed. So in subsequent comments he may need to address them.”