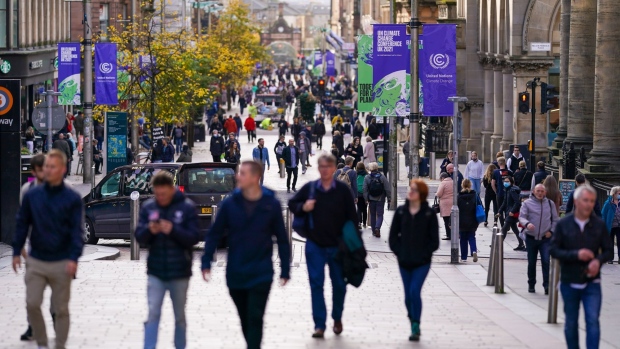 (Bloomberg) -- A blueprint for how developed countries will contribute $100 billion a year to poor nations confronting climate change is set to be unveiled on Monday despite objections from the U.S. and other nations that almost derailed the announcement.

The plan is seen as critical to the success of the United Nations COP26 climate summit scheduled to begin Oct. 31 in Glasgow, Scotland.

Rich nations have fallen short of their 2009 pledge to collectively deliver $100 billion annually to help poor countries confront climate change, shift to clean energy and build resilience. And without more money, some developing nations, such as Bangladesh and Indonesia, have said they can’t step up their climate pledges.

Developed countries were roughly $20 billion below the $100 billion target in 2019, the last year for which totals have been released.

The U.S. had objected to a plan to make up for shortfalls in previous donations with higher contributions in future years, according to three people familiar with the matter who asked for anonymity to describe private negotiations. Details of how the matter was settled weren’t immediately available but the people confirmed that an announcement, which had been expected this week, would be made Monday.

“Leadership has been lacking,” Gonzalez added. “Developed countries will need to show a new level of solidarity, also in terms of acknowledging the impacts of the pandemic have been uneven and so has been the recovery.”

President Joe Biden last month committed the U.S. to provide $11.4 billion in climate finance annually by 2024. And Congress is on track to spend between $2.8 billion and $3.1 billion on climate finance in fiscal 2022. Yet that still leaves the U.S. lagging well behind other developed nations in meeting its share of the target.

Whether -- and how -- to account for continued shortfalls this year and last so that finance still reaches a $100 billion annual average between 2020 and 2025 has been a major sticking point in negotiations, said the people. The U.S. was among nations concerned about the ability of the group to collectively increase contributions in future years to compensate, the people said.

Another point of contention was how much money to devote to climate adaptation, as vulnerable countries plead for more help dealing with the consequences of a warming world -- including droughts that stifle crops, intense storms that destroy communities and rising seas that threaten to swallow some island nations.

COP26 President Alok Sharma commissioned the plan from Canadian environmental minister Jonathan Wilkinson and Jochen Flasbarth, state secretary at Germany’s environment ministry, and asked them to deliver it before the UN summit.

Spokespeople for Wilkinson and U.S. Special Presidential Envoy for Climate John Kerry did not immediately respond to requests for comment.

At a meeting with European Union ambassadors Thursday, Sharma said negotiators remained “within touching distance” of a final deal, and asked attendees to “check your pockets for loose change,” according to a person familiar with the session.

The spending plan is being closely watched as a signal of the commitment of wealthy nations whose greenhouse gas emissions are most responsible for fueling climate change. A weak plan would complicate talks at the climate summit by undermining the credibility of developed nations and inflaming tensions on the issue, even as negotiators try to fashion a new finance promise beyond 2025.