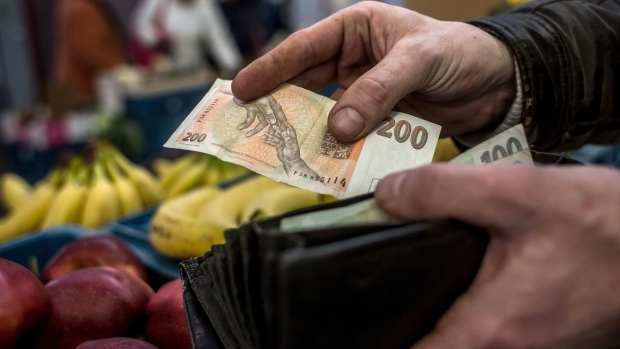 A vendor holds a 200 Czech koruna banknote at a vegetable stall in Holesovicka market hall in central Prague, Czech Republic, on Thursday, Jan. 4, 2017. The Czech Republic posted its biggest ever budget surplus last year after the government spent less than planned and economic growth boosted tax receipts, a rare success that ruling party leaders seized on to stake out their positions before fall elections. , Bloomberg

(Bloomberg) -- The Czech government proposed to raise 149 billion koruna ($6 billion) over the next three years by imposing windfall taxes on the biggest companies in selected industries to fund its energy subsidies.

Stanjura is trying to boost budget income to aid households and businesses in the worst cost-of-living crisis in three decades without the deficit getting out of control. He said the war in Ukraine and surging global energy prices require fresh public spending that can’t be covered entirely with borrowed funds.

“Some parts of our economy, such as the energy, banking and petrochemical industries, are generating high extraordinary profits,” he said. “I find it prudent for the state to use extraordinary resources to pay for these extraordinary wartime expenses.”

The proposal, which has the backing of the ruling coalition, must be passed by parliament to take effect.

Czech banking stocks fell earlier on Thursday after Bloomberg reported the government was planning a 60% windfall tax on the industry. Shares in majority state-owned power producer CEZ AS have outperformed peers this year thanks to record profits, but the threat of windfall taxes has kept its market valuation under pressure since the summer.

The year-old fiscally conservative administration of Prime Minister Petr Fiala originally pledged to refrain from raising taxes and to reduce the pandemic-era budget deficit by cutting spending instead. Stanjura on Thursday cited windfall taxes from the 1980s imposed on UK banks by then-Prime Minister Margaret Thatcher as inspiration for the Czech levy.

“This really is no left-wing or socialist engineering, as some critics say,” the Czech finance minister said. “It’s a temporary tax surcharge on extraordinary profits that companies achieved without any extra effort.”