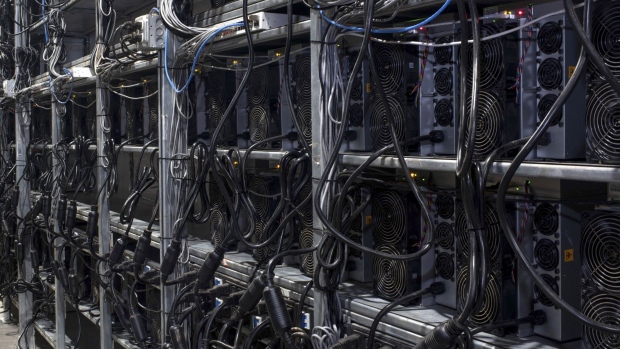 Bitcoin mining machines in a warehouse at the Whinstone US Bitcoin mining facility in Rockdale, Texas. , Photographer: MARK FELIX/AFP

(Bloomberg) -- Beleaguered crypto lenders are being dealt another blow from Bitcoin miners as they weather the aftermath of the FTX collapse.

Miners, who raised as much as $4 billion from mining-equipment financing when profit margins were as high as 90%, are defaulting on loans and sending hundreds of thousands of machines that served as collateral back to lenders. New York Digital Investment Group, Celsius Network, BlockFi Inc., Galaxy Digital, and the Foundry unit of Digital Currency Group were among the biggest providers of funding to finance computer equipment and build data centers.

The liquidity crunch hitting digital-asset markets after FTX failed comes as low Bitcoin prices, soaring energy costs and more competition weigh on miners. Loans backed by the computer equipment, known as rigs, had become one of the industry’s most popular financing tools. Many lenders are now likely facing substantial losses since they can’t seize any other assets besides the machines, whose value has dropped by as much as 85% since last November.

“People were pouring dollars into the mining space,” said Ethan Vera, chief operations officer at crypto-mining services firm Luxor Technologies. “Miners ended up dictating a lot of the loan terms, so the financiers moved ahead with a lot of the deals where only the machines were collateral.”

Iris Energy Ltd. said this month it expected to default on $108 million of limited recourse loans, which is mostly backed by mining rigs. The publicly-traded miner is a long-time borrower of NYDIG, winning a $71 million loan secured by 19,800 rigs as recently as March. That was the miner’s third facility secured by NYDIG, a unit of Stone Ridge Holdings Group. Core Scientific Inc., which has warned of bankruptcy, had $39 million of rig-backed loans with NYDIG, and $54 million with now bankrupt BlockFi, as of September. Stronghold Digital Mining already returned around 26,200 mining rigs in August to eliminate $67 million debt owed to NYDIG.

“We continue to take a prudent, risk-managed approach toward financing arrangements in the mining space. In the third quarter, for example, Galaxy’s mining arm closed three existing machine leases collectively worth about $8 million at expected terms without defaults, delinquencies, or losses,” said Michael Wursthorn, a spokesman for Michael Novogratz’s Galaxy.

There is likely to be more defaults. Compared to the publicly-listed miners, private companies currently contribute about 75% of the computing power for the entire Bitcoin network and most of their rig-backed loans with the lenders remain undisclosed, according to data from Luxor. Additional loans will likely come under stress if more private large-scale miners such as Compute North file for bankruptcy.

“There hasn’t necessarily been the best due diligence on whether a miner was credit worthy or not,” said Matthew Kimmell, digital asset analyst at crypto investment firm CoinShares.

While miners tend to default when they are cash-depleted, some companies may have decided to stop paying the loans even if they still have cash on balance sheets, according to Luxor’s Vera. The collateral can be worth less now than the remaining payments for some miners.

“It could be an economic decision to walk away from the financing deals,” Vera said. “Miners are focused on how to survive the next six months rather than if they need the lender for the next five years.”

The miners use powerful energy-guzzling computers to secure the Bitcoin blockchain by validating transaction data and earn rewards in the form of the token. Bitcoin has tumbled about 75% since reaching an all-time high in November 2021.

Lenders are already looking at a glut of machines after liquidating rig-backed loans from miners. They face the option of selling equipment at a steep discount or finding data centers to mine Bitcoin themselves.

(Adds comments on lending from Galaxy in the sixth paragraph.)