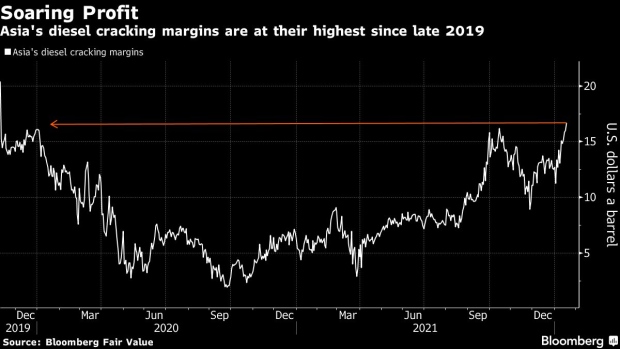 Prices of Russian crudes are the latest signal of the sustained market bullishness. Spot differentials for Sokol that are scheduled to be shipped in March rose by at least 40 cents a barrel from the previous trade, while the premium commanded by ESPO crude -- a favorite grade among Chinese processors -- surged to the highest since November, according to traders.

Physical crude markets around the world have run hot this month as traders look beyond the impact of the omicron variant and contend with supply disruptions in Libya and Kazakhstan. Even as China’s zero-Covid policy clouds the outlook for demand in the top importer, profits from turning crude into diesel, Asia’s major export fuel, have hit the highest since November 2019.

Brent futures have soared in the opening weeks of 2022, reflecting the underlying bullishness on display in the physical markets. The key benchmark jumped to the highest level since 2014 on Tuesday, topping $87 a barrel and taking year-to-date gains to 12%. Goldman Sachs Group Inc. has upgraded price forecasts for this year and next, targeting $105 a barrel for 2023.

Prompt swaps for Dubai crude -- a benchmark for barrels that make up the baseload of feedstock for Asian refineries -- have also turned more bullish, widening to $1.35 a barrel in backwardation, up from 75 cents at the start of the month. Backwardation is a bullish pattern that’s marked by near-term prices trading above those further out, indicating tight supply.

In addition, the premium of Brent over Middle Eastern benchmark Dubai has also been increasing. That acts to reinforce demand for crude flows from the Middle East as arbitrage cargoes marked off Dated Brent become pricier, making Dubai-linked cargoes more attractive for Asian buyers.

Further purchases may be in store. While China International United Petroleum & Chemical Co., also known as Unipec, went on an early buying spree and snapped up millions of barrels, another giant independent Chinese giant refiner, Rongsheng Petrochemical Co., and Thailand’s PTT Pcl are still seeking spot cargoes. That’s likely to add to the bullish momentum, according to traders.