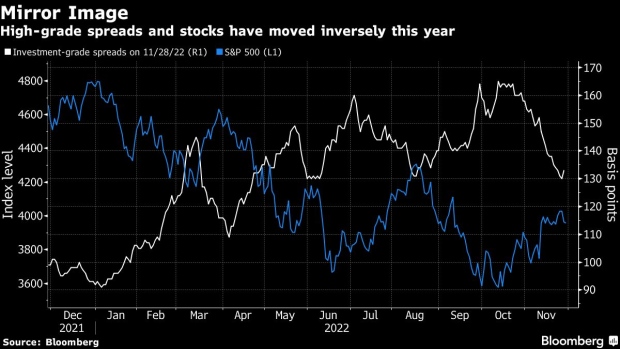 (Bloomberg) -- Corporate credit markets, long the asset class of choice for people looking for clean insights into the economy, have turned as murky as everything else in 2022.

Rather than serve as a foil to equities’ emotionalism, bond spreads this year have bounced around with virtually the same fickleness, widening at stock troughs and narrowing at peaks, a note from DataTrek Research’s Nicholas Colas highlights. Most recently, spreads on investment-grade bonds reached their ceiling for the year at roughly 165 basis points on Oct. 12, while the S&P 500 touched 2022’s low just a day later. Similar episodes occurred in late June into July, March and early January.

While it’s true that in times of heightened volatility -- such as when the Federal Reserve unleashes a series of uber-aggressive rate hikes -- correlations grow tighter, credit spreads are often regarded as a read on corporate America’s health and access to capital, and thus, are viewed as a harbinger of stress for other asset classes. But few reliable signals have been apparent in 2022.

“Which is the smart money, is it equities, is it corporate fixed-income, is it Treasuries, what is it? The upshot is it’s there’s no clear answer,” Colas said. “I went through the math of the individual turns in the market between spreads and the S&P. Sometimes they lead by a day or two, sometimes they lag by a week or two, all I can say for sure is they’ve been very coincident in general in turns all this year.”

Given all the ups and downs, it’s probably a mistake to read too distinct a macro message into any market, Colas said. Case in point is now, when narrow spreads, buoyant stocks and a low reading in the Cboe Volatility Index might be seen as saying good things about next year’s profit picture. It’s more likely a sign that “overall investor confidence in corporate earnings may be out of step with economic and fundamental realities,” he said.

Strategists at banks including Morgan Stanley and Bank of America Corp. have also been sounding the alarm on corporate earnings heading into the new year.

High-grade and junk spreads have both compressed in recent weeks alongside a stock rebound on hopes that the Fed will soon dial back its pace of tightening. While still more than 17% lower in 2022, the S&P 500 has rallied about 10% over the past two months.

That risk-on appetite is out of step with the mood music playing in the Treasury market. The two- and 10-year Treasury yield curve, often considered a harbinger of recession, is hovering near its most inverted levels in decades as turbulence in the world’s biggest bond market soars.

“Low corporate spreads versus recent history combined with a near 20 handle VIX makes us quite concerned that markets are too complacent at present,” Colas wrote.