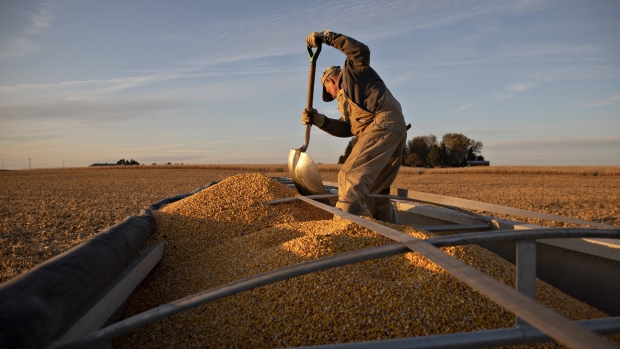 A farmer uses a shovel to move corn inside a semi trailer during a harvest in Buda, Illinois, U.S., on Tuesday, Nov. 5, 2019. Wheat and corn futures were declining as lackluster U.S. export sales underscored concerns about abundant global grain supplies. , Bloomberg

Corteva gains a closely held Houston-based company with operations and sales in more than 60 countries and $400 million in forecast revenues from the deal, the Indianapolis-based company said Wednesday in a statement. The all-cash takeover is expected to close in the first half of next year and will add to Corteva earnings for 2023.

The move comes as the agricultural industry seeks alternatives to chemical pesticides and fertilizers, with farmers increasingly under pressure to adopt environmentally friendly practices. Biologicals use material that already exist in nature to replace synthetic ingredients in chemical pesticides. Pest and crop diseases are growing more resistant to synthetic chemicals.

Bloomberg reported in May that the owners of Stoller were exploring a sale that could value the company at as much as $1.5 billion, including debt.

The takeover is Corteva’s second biologicals deal this year, after agreeing to buy Spanish microbiological technologies firm Symborg in September, and the latest in a series of industry acquisitions in the alternative crop protection area. Rival FMC Corp. agreed to acquire pheromone pioneer BioPhero ApS for about $200 million in June.

The biologicals market is expected to grow high-single digits annually through 2035, representing about 25% of the overall crop protection market by 2035, Corteva said in its statement.