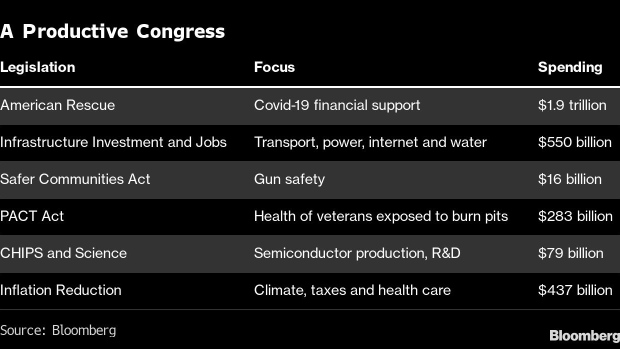 The U.S. Capitol dome is seen from the U.S. Supreme Court on Capitol Hill in Washington, D.C., U.S., on Monday, Sept. 28, 2020. Democrats zeroed in on the risk to Americans' health-care coverage in previewing the tactics they'll use to oppose the confirmation of Amy Coney Barrett as Senate Republicans have signaled plans for a quick confirmation process kicking off on Oct. 12. Photographer: Sarah Silbiger/Bloomberg , Bloomberg

(Bloomberg) -- The House and Senate are concluding a surprisingly productive streak despite deep-rooted partisanship and bitter acrimony between Democrats and Republicans.

Bipartisan success in passing legislation on long-stalled issues such as gun control and infrastructure, along with an emerging consensus on protecting same-sex marriages, show there is still room for across-the-aisle deal-making in the Capitol despite Congress’s reputation for gridlock.

“I think most Congresses are not as dysfunctional as the headlines sometimes indicate,” said Senator Roger Wicker, a Mississippi Republican who has served in Congress since 1995.

Democrats, with only the slimmest margin of control, also managed to put aside a year and a half of haggling among themselves to overcome unified Republican opposition and give final passage to a slimmed-down version of President Joe Biden’s economic agenda on Friday.

Biden’s party hopes the spate of productivity energizes voters ahead of the midterm congressional elections, which will determine control of the House and Senate for the last half of the president’s first term. High inflation and a troubled economy has tanked Biden’s approval ratings, and Democrats see the legislative wins as a chance to create momentum ahead of November.

But Republicans can use the bipartisan accomplishments in their campaigns as well, to demonstrate to voters that they can get things done and deliver on priorities if they gain control of Congress after the midterm election.

“Given how difficult it has been for lawmakers to make deals outside of an immediate crisis, my sense is this current Congress has kind of exceeded what a lot of people thought would be possible in a 50-50 Senate, with such tight margins in such a polarized period of American politics,” said Sarah Binder, a professor at George Washington University and senior fellow at the Brookings Institution who specializes in legislative politics.

Here are some of the most significant bills passed by this Congress and what is still to come after the August recess:

The legislation allows Medicare to negotiate prescription drug prices and includes historic investments in clean energy. But the bill lacks many of the social overhauls, such as free community college and subsidized child care, in Biden’s original plan and pushed by progressives. In the end, Democrats decided any deal was better than no deal.

Fixing the nation’s crumbling infrastructure has been such an elusive goal in Washington for so long that it had become the punchline for jokes inside the Beltway. But lawmakers late last year cobbled together bipartisan support for the $550 billion Infrastructure and Jobs Act, passing the largest investment in roads, bridges and transportation since 1956.

The legislation almost stalled amid a revolt from House progressives, who wanted Democrats to vote first on the larger economic agenda. After pressure from Biden and party moderates, most progressives ultimately relented and 13 Republicans joined all but six House Democrats to support it. In the Senate, the vote marked a rare point of consensus for Schumer and Senate Republican leader Mitch McConnell, who was one of 19 GOP senators to back the bill.

Congress passed another bipartisan bill in July that includes $52 billion for domestic semiconductor manufacturing. The bill got the support of 64 senators, including from McConnell. In the House, GOP leader Kevin McCarthy urged his caucus to vote against the bill but 24 Republicans broke ranks to support it.

In two trips to the Capitol before the chambers voted, Commerce Secretary Gina Raimondo highlighted the economic and national security need of investing more in the semiconductor industry. In addition to the semiconductor funding, the legislation includes money for research and workforce training and 5G wireless technology.

After the tragic shootings in Buffalo, New York and Uvalde, Texas, senators Chris Murphy, a Connecticut Democrat, and John Cornyn, a Texas Republican, jump-started talks to pass modest gun reform that could get GOP votes. Backers called the bill, aimed at improving background checks, securing schools and giving states federal funds to combat gun violence, the biggest breakthrough on the issue in decades.

The bill closes the “boyfriend loophole” to bar convicted dating partners from buying guns, gives states incentives to upload juvenile records for background checks on buyers ages 18 to 21, and provides funding to improve mental health resources and secure schools. The bill got support from 15 GOP senators and 14 Republican House members.

Congress in August passed a bill that expands health coverage to veterans exposed to burn pits after comedian Jon Stewart and veterans groups assailed GOP senators for blocking it.

Lawmakers also voted to protect people who experience sexual harassment at work, a victory for the #MeToo movement. The bill passed the House on a 335-97 vote and the Senate approved it on a voice vote.

The most significant overhaul of the US Postal Service in 16 years also passed this year with significant bipartisan support. The bill makes changes to the USPS delivery system and alleviates the agency from some of its fiscal troubles.

And there was strong support in both parties for a $40 billion aid package to support Ukraine in its fight against Russia. The Senate also ratified protocols to add Sweden and Finland to the North Atlantic Treaty Organization, in a move to bolster the military alliance after Russia’s invasion of Ukraine. Only one senator, Republican Josh Hawley of Missouri, voted against ratification.

Bipartisan tech antitrust legislation authored by Senators Amy Klobuchar and Chuck Grassley advanced from the Senate Judiciary Committee on a 16-6 vote, but has yet to hit the floor. Giants from the tech industry have invested millions in ads to combat the bill.

After its August break, the Senate is likely to take up a bill codifying same-sex marriage. Bipartisan support for the bill would mark a moment of cultural shift for the country, putting the right to same-sex marriage into federal law.

Schumer is working with Democrat Tammy Baldwin of Wisconsin, one of the bill’s Senate sponsors, to help line up support from at least 10 Republicans whose votes would be needed if all Democrats in the chamber support the legislation. The House passed the legislation with unified Democratic support and the backing of 47 Republicans.

Manchin and Maine Republican Senator Susan Collins have authored a bill to overhaul the Electoral Count Act. The proposed legislation, which could get a vote before the November midterms, would clarify the role of the vice president during the counting of electoral votes, and make other changes to the 1887 law.