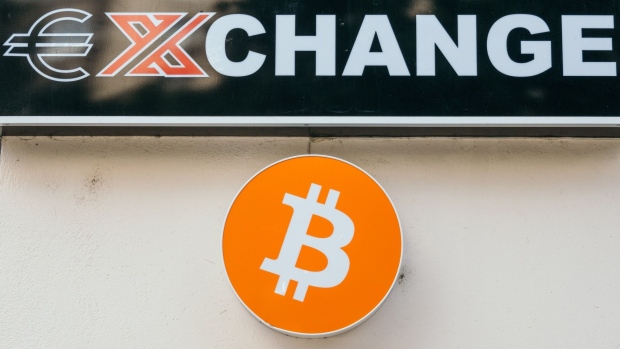 Signs for Bitcoin outside a cryptocurrency automated teller machine (ATM) kiosk, next door to a currency exchange office in Bucharest, Romania, on Tuesday, May 31, 2022. Cryptocurrencies re-established their tendency to trade in tandem with equities after divergence last week sparked concerns that investors would continue dumping digital tokens even amid a revival in demand for other risk assets. , Bloomberg

(Bloomberg) -- Cryptocurrency exchange CoinFlex said it has filed for restructuring in a Seychelles court, as it seeks to resolve a shortfall due to a counterparty failing to make a margin call.

The company sent out a notice on its restructuring process in emails to customers on Tuesday. It will seek approval from depositors and court on a proposal to issue depositors with rvUSD tokens, equity, and locked FLEX Coin.

“We look forward to welcoming a new group of shareholders to CoinFLEX and are glad to be in a jurisdiction where we can quickly resolve this situation and return maximum value to depositors,” Mark Lamb, chief executive officer of CoinFlex, told Bloomberg News.

CoinFlex froze withdrawals in June after a counterparty, which it has identified as crypto investor Roger Ver, failed to pay a margin call. Ver, however, denied he defaulted on debt owed to CoinFlex.

CoinFlex has since allowed limited withdrawals and cut “a significant number” of staff to lower costs. Lamb said the company will make more portions available for withdrawals as part of its restructuring process, pending on the vote result.