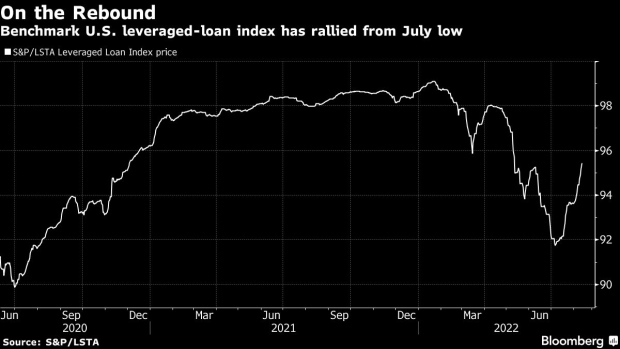 A U.S. flag on the floor of the New York Stock Exchange (NYSE) in New York, U.S., on Monday, Jan. 3, 2022. As 2022 begins, the overriding message from almost 50 financial institutions across Wall Street and beyond is that conditions still look good, but the rip-roaring rallies powered by the reopening are history. Photographer: Michael Nagle/Bloomberg , Bloomberg

(Bloomberg) -- Money managers bought billions of dollars of leveraged loans in the US and Europe earlier this year, expecting to package them into bonds. Now the value of the debt has dropped, and firms are struggling to find ways to offload it without taking big losses.

Their trouble is critical for Wall Street. These fund managers, the biggest purchasers of leveraged loans, are looking to bundle their current holdings into bonds known as collateralized loan obligations. If they can’t sell the CLOs over the next year or so, their loans may be liquidated, causing a potential flood of selling that could press prices lower in a market that’s already been hit by recession fears. That would roil yet further a funding stream that’s been a critical lifeline for riskier companies and for acquisition financing.

Asset managers are looking at different ways to sell off these holdings, including bundling them together with cheaper loans purchased in the secondary market, so the average price of the assets is more in line with current levels. Another possibility is to sell off the portfolio without retaining the right to buy and sell the underlying loans.

The clock is ticking because fund managers used temporary lines of credit from banks, known as warehouse lines, to pay for the loans they bought. Those warehouses typically mature in about 24 months, and if loans sit in them for more than 12 months, banks can freeze them, and force asset managers to add more equity to their portfolios.

There are about 220 warehouses outstanding now, nearly 40% of which are nine months or older, according to an Amherst Pierpont Securities report in July based on warehouses administered by US Bank, trustee for about half the market. The outstanding warehouses could have somewhere around $45 billion of loans.

In the first quarter, when there were similar numbers of warehouses, the proportion of old facilities was closer to 17%. If fund managers can’t offload the loans they’ve bought in time, they can negotiate with banks to extend the maturities of their warehouse lines.

Any forced sales that happen could further weigh on leveraged loan prices that have already dropped about 3.5 cents on the dollar this year through Aug. 10 in the US, to around 95 cents. Loans have rebounded by about 3 cents since early July, but fears of future sales could hold back further gains.

To sell off their loan holdings, one technique money managers have used is known as creating a split warehouse. The warehouse is divided into two. Some of the previously purchased loans stay in one section.

The rest of the previously bought loans are moved into a second section, where they are mixed in with cheaper loans bought in the secondary market. The combination of loans bought at older, higher prices and newer lower prices results in an average level that’s acceptable for the second section to back a CLO. But the first section remains unsold.

Napier Park sold a roughly $500 million split warehouse transaction in the US in early May, according to people with knowledge of the matter. And Partners Group used this method in Europe, taking advantage of cheap loan prices. Both Napier and Partners representatives declined to comment on the deals.

The downside of the split warehouse is that not all of the original loans are totally cleared out, forcing the money manager to figure out how to offload the rest. Ideally, loan prices will rise in a few months, making debt purchased earlier this year easier to offload.

“With split warehouses, you are spreading the pain out, hoping the market rallies on the second half so the loans are less underwater,” said Cyrus Moshiri, who does credit structuring and fundraising for CLOs and direct lending at New Mountain Capital, in a phone interview.

Another way to clear out a warehouse full of underwater loans is to package them into a different kind of CLO, known as a static deal. These transactions are built around the cash flows from a fixed pool of loans.

Most CLOs sold over the last decade have instead had dynamic pools, where the fund manager putting the deal together could buy or sell loans over a few years. With a static pool, bond investors get their money back when the loans repay principle or there is other excess cash.

In a dynamic pool, incoming cash from loans first pays bondholders’ interest, and any excess goes to equity investors for a fixed period of time. Ratings firms allow static deals to fund themselves with less equity. Given current market prices, that could mean 30% to 50% less equity that managers need to raise to do a deal. Lower equity levels can help a CLO deal get done, because finding investors willing to buy the riskiest parts of the deals can be hard now.

“The smaller amount of equity investment becomes material in an environment like this where financing costs can be relatively expensive,” said Jon Siatkowski, head of CLO structuring at Marathon Asset Management. “You’ll see more upside in the return profile if you buy assets that will ultimately realize par.”

From the archive: CLOs Explained: QuickTake

Four static deals were priced in the US in July, including one from Crescent Capital Group LP, and Europe, where these deals are rarer, has also seen one from Sound Point Capital Management LP. But while usually statics get very tight spreads on the liabilities, that’s not the case now. Spreads on the largest tranche of Crescent’s recent almost $400 million bond reached 260 basis points, wider than how other AAA tranches on dynamic CLOs were pricing -- closer to 220 basis points.

That funding is relatively expensive for the CLO, but if loan prices rise, or the liabilities can be refinanced in a year or so, it can perform well for the manager, said Bill Lemberg, managing director at Post Advisory Group, in a phone interview.

Issuance of new CLOs in the US has been partly undermined by rates volatility, plunging loan prices and investors’ fear of recession. Volume is down about 10% year-to-date, at about $88 billion.

Banks led by Bank of America Corp. are expected to keep about $2.5 billion to $3.5 billion of a loan provided for the buyout of Citrix Systems Inc.on their balance sheets, even as they ramp up efforts to offload the rest to investors.

The recent rally does’t make a lot of sense given that manufacturers are facing skyrocketing energy prices and Germany is tipping toward recession, according to Commerzbank AG strategist Marco Stoeckle.

Chinese developers have suffered a meltdown of at least $90 billion in stocks and dollar bonds this year, with a bursting housing bubble and an intensifying debt crisis threatening to inflict even more pain.