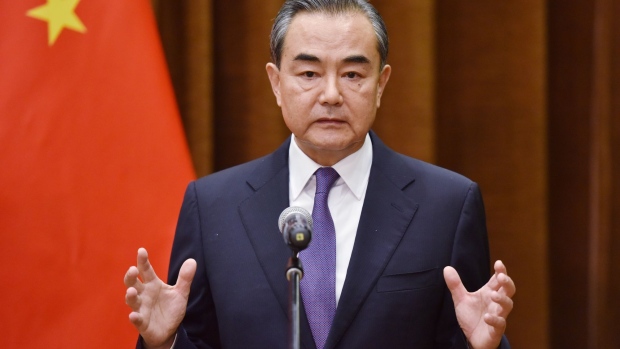 Chinese Foreign Minister Wang Yi said the US’s Indo-Pacific strategy is “doomed to fail,” making his remarks while President Joe Biden is in the region to increase engagement with allies and counter China’s rise and influence.

“Facts will prove that the so-called ‘Indo-Pacific strategy’ is essentially a strategy for creating divisions, a strategy for inciting confrontation, and a strategy for destroying peace,” the Chinese foreign ministry said in a statement after Wang met his Pakistani counterpart Bilawal Bhutto in Guangzhou Sunday.

In his first trip to Asia as US president, Biden has met with South Korea’s newly elected leader Yoon Suk Yeol. He will join Japanese Prime Minister Fumio Kishida in Tokyo Monday, followed by a Quad summit with Japan, Australia and India the next day.

Biden also plans to unveil the Indo-Pacific Economic Framework at an event that will feature virtual appearances by other leaders from the region. The IPEF is key to the Biden administration’s efforts to counter China’s clout in Asia, following the US withdrawal from talks on the Trans-Pacific Partnership regional trade agreement under former President Donald Trump.

The pillars of the framework include clean energy, supply-chain resilience; decarbonization and infrastructure; and taxation and anti-corruption. The US hasn’t listed the initial countries that will be part of the IPEF agreement, but said more nations are expected to sign on in the months ahead.

Last week, a group of more than 50 US senators wrote to Biden urging him to include Taiwan as a partner in the IPEF.

US trade chief Katherine Tai met Taiwanese Minister Without Portfolio John Deng on the sidelines of a ministerial gathering in Bangkok last week, where they discussed opportunities to deepen their economic relationship even as China’s top diplomat warned Washington it’s heading down the “wrong road” with its support for the island.

The US’s strategy “is under the banner of ‘freedom and openness,’ but it is keen to gang up and create ‘small circles’” in an attempt to contain China, the Chinese foreign ministry said in the statement Sunday.