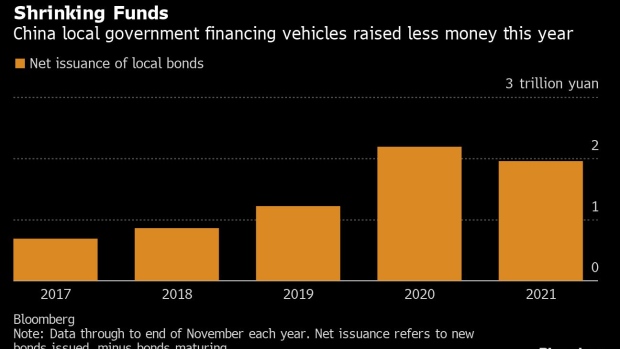 (Bloomberg) -- China is betting that a pickup in infrastructure spending can spur investment and cushion a property-led slowdown which has dragged economic growth down to almost its lowest pace in more than three decades.

But because the property curbs are hitting government revenue from selling land, Beijing will need to ease its tough campaign to crack down on “hidden” local government debt if it wants a long-lasting revival in infrastructure spending.

Premier Li Keqiang last month urged local governments to make better use of the proceeds from the sale of 3.65 trillion yuan ($573 billion) in “special” bonds to counteract “downward pressure” on the economy. The bonds are used to fund specific projects rather than general expenditures and regional authorities have almost completed the sale of this year’s quota.

The quota could be expanded to 4 trillion yuan next year, according to state media reports, but even that amount of funding would be small relative to China’s total infrastructure spending needs. Bloomberg Economics estimates infrastructure investment will reach about 23 trillion yuan in 2021, which implies special bonds can only around 16% of that expenditure.

The remainder is mainly paid for with money from land sales and local government financing vehicles, which are companies set up by local governments to raise debt from loans and bond sales and then keep that borrowing off of government balance sheets. Both those sources of financing are under strain from property sector curbs and a campaign against “financial risks.”

Those financing vehicles raised less money in 2021 as Beijing ordered local governments to cut their “hidden” off-balance sheet debt. LGFV’s net local bond issuance -- the excess of newly sold bonds over repayments -- in the first 11 months of the year was 1.95 trillion yuan, down from 2.19 trillion yuan in the same period last year, according to Bloomberg estimates.

The platforms have found it harder than in the past to obtain loans from banks and from non-bank “shadow” financing because Beijing has been shrinking the shadow finance sector as part of its financial de-risking effort. They have also raised less from foreign investors: LGFV’s net issuance of dollar-denominated bonds through the end of last month more than halved to $5.7 billion.

The property crackdown is also reducing local government’s sales of land to property developers, a major source of funds for local government investment. Infrastructure spending growth has moved almost exactly in line with land sales revenue growth in recent years, according to analysis from Goldman Sachs Group Inc., while the correlation with special bond and LGFV bond issuance is less significant.

Beijing’s efforts to slow the real estate market began cutting into land sales volumes and prices this summer. Local government income from land sales shrank by more than 10% year-on-year in August, September and October, the largest and most sustained decline since 2015, according to Wei He, an analyst at Gavekal Dragonomics.

In the first 10 months of the year, infrastructure investment rose just 1% compared with the same period a year earlier, leaving local governments with unspent funds.

“The positive factors such as money that hasn’t been spent this year will be countered by the negative impact from land sales,” He said. “Therefore I do not expect a significant acceleration in infrastructure spending to materialize next year.”

To be sure, “special” bond issuance has been concentrated at the end of this year, which could translate into a slight pick-up in infrastructure spending in the first half of 2022 if the funds are quickly put to use. But local governments have been struggling to find suitable projects to fund with special bonds whose conditions stipulate that investments must generate enough income to repay the bond principal and interest.

Local governments’ land sale revenue could fall 10% year-on-year in 2022, according to Gavekal’s He. That means if Beijing really wants infrastructure investment to increase, it will need to loosen the constraints on LGFVs, compromising on its goal to control debt-levels in the economy.

“If the economy softens in 2022 and the government needs to increase infrastructure spending to support economic growth, there would be easing in financing for LGFVs,” said Ivan Chung, associate managing director at Moody’s Investors Service in Hong Kong.