China’s economy performed better than expected in October as retail sales climbed and energy shortages eased, though a slump in property and rising COVID outbreaks show the recovery isn’t on solid ground yet.

Industrial output rose 3.5 per cent in October from a year earlier, while retail sales growth accelerated to 4.9 per cent, beating economists’ forecasts. Growth in fixed-asset investment eased to 6.1 per cent in the first 10 months of the year, with tighter curbs on the real estate market continuing to weigh on the sector. The surveyed jobless rate was steady at 4.9 per cent. 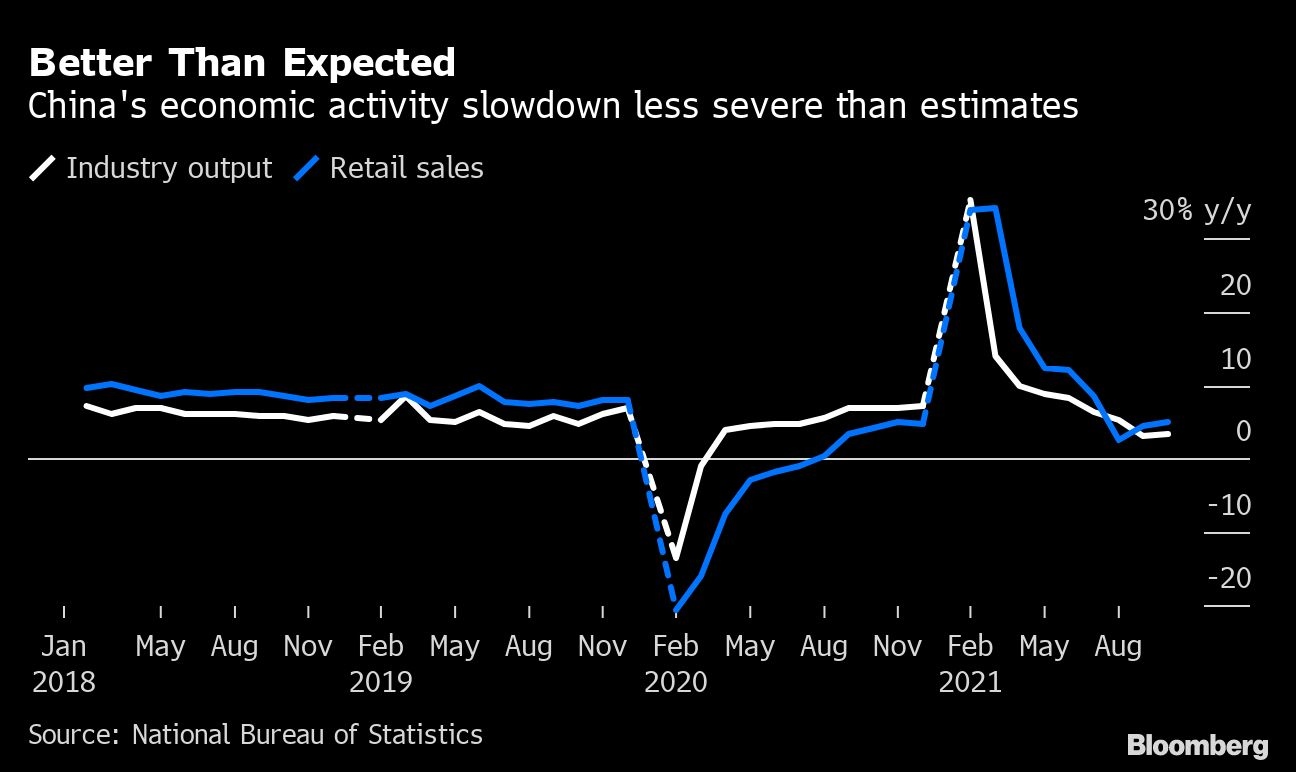 The better-than-expected numbers provides some relief after the economy’s momentum weakened in recent months on the back of energy shortages, Beijing’s reining in of the property market and widespread COVID-19 outbreaks. However, the recovery remains uncertain, given the outsized contribution of real estate -- at 25 per cent of GDP when related industries are included -- and the disruption to travel and spending from the government’s stringent virus restrictions.

“Overall there is some improvement, especially in the mining and utility industries,” said Lu Ting, chief China economist for Nomura Holdings Inc. “But other areas actually didn’t improve substantially and remain at low levels, especially for investments.”

Lu said rising prices and consumers panic-buying goods at the beginning of October may have contributed to the pickup in retail spending last month. When adjusting for inflation, retail sales rose 1.9 per cent in October from a year ago, a slower pace than in September.

Electricity shortages, which had been a key constraint on industrial output in September, eased last month, with power supply climbing 11.1 per cent in October from a year earlier.

The property slump continued to weigh on output, with production of construction-related commodities, such as steel and iron, contracting. Investment in new construction declined for a fourth month, dropping 7.7 per cent from a year ago.

Separate data from the NBS showed home prices fell 0.25 per cent in October from the previous month, a bigger decline than in September. The benchmark stock index was about 0.3 per cent lower, with property developers declining more after the news on falling home prices.

China’s stronger-than-expected October activity offers some assurance the economy is not sliding deeper into a rut, though there’s no sign it’s set for a turnaround. An extra working day in the month was one reason for the better picture. Even accounting for that, output appeared to stabilize.

The NBS said in a statement the economy “was generally stable and maintained the trend of recovery.” It warned that the “international environment is still complicated and severe with many unstable and uncertain factors.”

“The potential for sudden strict domestic travel restrictions means that people are still very hesitant about travel,” she said. “This could continue into the coming Chinese New Year holiday in February 2022.”

The slowdown has put the spotlight back on policy makers, who have so far taken a muted approach to stimulus, preferring to “fine-tune” policies rather than flood the economy with support. In line with that approach, the People’s Bank of China refrained from injecting additional cash into the financial system in its monthly liquidity operation on Monday, rolling over all the loans maturing instead.

Most economists expect Beijing to stick with the property curbs, resulting in weaker growth into next year. GDP growth is expected to slow to 3.5 per cent in the final quarter, reach 8 per cent for the full year and weaken to 5.4 per cent in 2022, according to a Bloomberg survey of economists.

“Growth will likely weaken in the rest of this year,” said Zhang Zhiwei, chief economist at Pinpoint Asset Management Ltd. “The slowdown in the property sector continued, which is the key risk for the macro outlook in the next few quarters.”