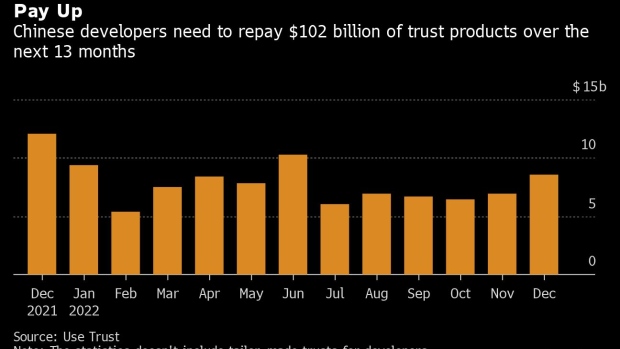 Unfinished apartment buildings at the construction site of China Evergrande Group's development on the outskirts of Nanjing. , Bloomberg

(Bloomberg) -- Chinese developers are facing $12 billion in trust payments coming due in December, posing a major challenge for the sector whose liquidity squeeze has spooked global markets.

The firms have already this year defaulted on more than $10 billion of these high-yielding, short-term products, which had been deemed to be a legitimate, safe and predictable place to park money for mainly wealthy Chinese and institutions. That comes on top of at least $10.9 billion of potential losses in other wealth products at developers, including China Evergrande Group, which has angered employees and tens of thousand people across China.

Developers are struggling to stay afloat after Beijing pushed to rein in the industry following years of breakneck growth. A deepening contagion into the $3 trillion trust industry will add pressure on policy makers to ease the crunch in order to avert a more dramatic slowdown, with the real estate industry accounting for about 15% of the economy.

“The trusts coming due will aggravate the burden for developers to repay their debt, meaning overall default risk will likely be higher,” said Ziv Ang, an analyst at UOB Kay Hian.

While some restrictions on bank loans for the sector have been eased and policy makers have directed local governments to step up construction spending, shadow banking channels such as trusts remain tightly controlled. They have been required to cut exposures to real estate and cap new issuance, according to people familiar with the matter. At least two trust firms have suspended issuing new property products since August, the people said.

New trust issuance has slumped to about $6.8 billion this year, a record low as defaults hit $10 billion, according to data provider Use Trust. Trusts cut outstanding loans to property firms by 17% by June from a year earlier, according to the China Trustee Association.

Evergrande, the world’s most indebted developer whose plight has sent shock waves through the industry, has done business with most of the 68 trust companies in China. They accounted for 41% of its total financing, based on its latest borrowing disclosure. Developer trusts made up 13% of all outstanding money trusts as of end-June, according to the trust association.

Guosheng Securities Co. estimates that developers have a total of $14 billion due in December, including some tailor made products known as “single trusts” that were not tracked by Use Trust. The repayment pressure will build in March, May and June next year, when more than 50 billion yuan of trusts expire each month, according to Guosheng.

“The cash situation for developers is so bad,” said Yang Yewei, an analyst at Guosheng Securities. “We’ll need to see if the slump in trust financing will marginally turn for the better or worse going forward.”

The data doesn’t reveal which developers are on the hook for upcoming payments. Among trust firms, Everbright Trust and Minmentals International Trust Co., have the most expiring over the next two months, with more than 10 billion yuan each in project financing.

The cash crunch is having a major impact on land development across China, where cities rely heavily on selling off parcels to raise funds. Plots offered by the government in Shenzhen, the nation’s most expensive residential market, sold for a premium of just 5% in a round in November, down from 31% just six months ago, according to China Real Estate Information Corp. The supply of new land was halved from the prior round.

China’s economy is facing multiple risks heading into next year, battling a property slump and the ongoing pandemic. Some local governments have eased restrictions on the use of proceeds from pre-sales as well as home and land sales. The State Council has called on local governments to sell more special bonds this year to boost investments as growth cools.

On top of trusts, looming bond payments are likely to keep investors on edge. Chinese developers need to repay some $2.1 billion in offshore bonds in December and $6.1 billion in January, according to data compiled by Bloomberg.

With borrowing costs for Chinese junk-rated dollar bonds hovering at about 20%, yields remain too high for most builders that need to refinance imminently maturing debt.

“The recent easing of financing restrictions favors state-owned developers more, so privately-owned peers will be under more pressure,” said Ang at UOB Kay Hian. “Given that many of them have had their credit rating downgraded, it’s impossible for them to issue new bonds so they’ll most likely resort to equity financing or asset sale to come up with cash.”