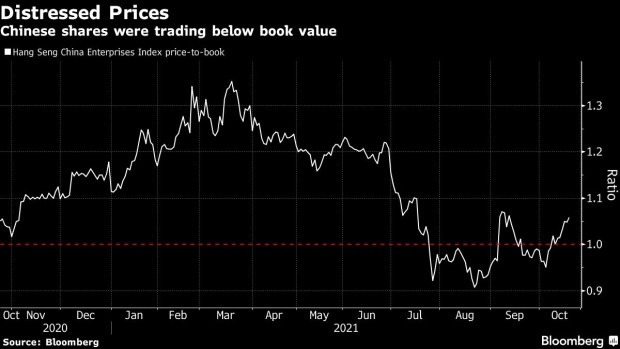 SHANGHAI, CHINA - APRIL 13: A staff worker wears protective mask and suit while walking past a monitor showing the current stock information at Shanghai Stock Exchange Building on April 13, 2020 in Shanghai, China. Health authorities of China said the country has passed the peak of the COVID-19 epidemic on March 12. As of today, the novel coronavirus (COVID-19) has infected more than 1,895,000 people and killed over 114,000 globally. The World Health Organization (WHO) declared the rapidly spreading coronavirus outbreak a pandemic on March 11. (Photo by Yves Dean/Getty Images) , Photographer: Yves Dean/Getty Images AsiaPac

(Bloomberg) -- Investors have been running scared of China this year as a regulatory crackdown and fears of financial contagion have roiled the nation’s assets. They now look to be making their way back.

Chinese authorities have in recent days allayed the biggest concerns held by global funds through speeches, state-media articles, looser policy and in some cases direct intervention. The message is clear: Beijing will act to avoid a property-market collapse, address energy shortages, contain China Evergrande Group’s debt crisis, and limit its tech market crackdown. And for the first time, President Xi Jinping clarified what his “common prosperity” campaign is trying to accomplish.

The result was a dramatic turnaround in Chinese markets this week, with a high-yield credit index heading for its biggest gain in 18 months, beaten-up stocks such as Didi Global Inc. and Kuaishou Technology surging about 20%, and developer shares posting the biggest two-day gain in nine months. BlackRock Inc. and UBS Group AG are among those turning more bullish on China’s equities, while Morgan Stanley’s credit desk said it’s time to buy speculative-grade debt.

As investors lose their fear of the potential for a China-engineered financial crisis, depressed prices in the country’s stock and credit markets have made them compelling targets. Chinese stocks dropped so much in the third quarter they lagged the world by the most in 20 years. Credit traders were pricing a 45% default rate for the nation’s property developers, a number Morgan Stanley said was far too high.

“We think that this pricing is unrealistic,” Kelvin Pang, the brokerage’s Hong Kong-based strategist wrote in a research note this week. “China high-yield valuation is pricing a lot of downside risk and no expectation of easing from both regulators and local governments.”

Chinese policy makers have made it clear they won’t allow the Evergrande crisis to turn systemic. Vice Premier Liu He became the highest-ranking official to stress that fact, saying this week risks in the property market are controllable. People’s Bank of China Governor Yi Gang and an official at the country’s banking regulator both made similar comments.

The central bank is doing its bit to ensure there’s sufficient liquidity in the financial system, injecting 270 billion yuan ($42 billion) in short-term funding over the past three days. That’s helped suppress borrowing costs in the interbank market.

Authorities are also taking action to alleviate the credit crisis gripping the property industry, loosening restrictions on home loans at some of the largest banks and allowing the sale of securities backed by residential mortgages.

An index of property-developer shares has jumped almost 7% over the past two days, with Sunac China Holdings Ltd. surging 20%. Evergrande itself avoided default by wiring funds to pay a coupon due Saturday, triggering a rebound in its stocks and bonds. The world’s most indebted developer still needs to pay interest on another four dollar notes this year.

China also appears to be easing off on Big Tech, the target of the government’s anti-monopoly and big-data crackdowns. News that Alibaba Group Holding Ltd. founder Jack Ma traveled abroad for the first time in a year signaled to traders that billionaire entrepreneurs may be coming back into favor. Authorities are close to completing their investigation into Didi -- the ride-hailing firm that listed in the U.S. against the wishes of Beijing -- according to a Dow Jones report.

There’s still a lot that can go wrong.

Evergrande hasn’t made much progress on selling any of its main assets and it’s unclear at what point the government will step in to offer support if contagion spreads. China’s economic slowdown is likely to continue into October, with authorities battling a disruptive energy crisis as the approaching winter threatens to ratchet up demand. Inflation pressures mean expectations of monetary easing are being pushed back. Data this week showed new-home prices fell in September for the first time since April 2015.

But with valuations this low, investors are seizing on any sign that the government is pivoting toward more market-friendly policies.

“We have arrived at a new level of regulatory oversight, scrutiny and pressure, and it’s going to stay there, but the market has got a much better understanding of where the level is,” Ben Powell, chief investment strategist for Asia Pacific at BlackRock Investment Institute in Singapore, told Bloomberg Television this week. His firm turned moderately overweight Chinese shares last month, he said.