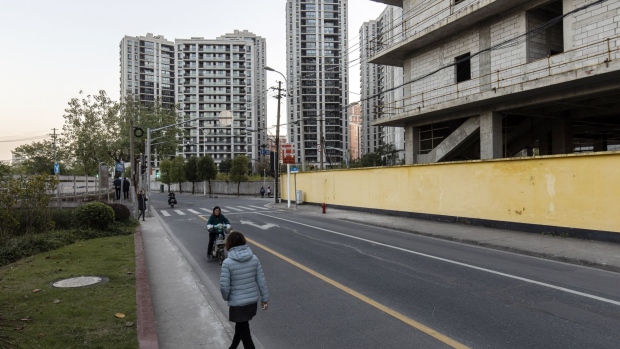 (Bloomberg) -- China’s struggling real estate developers had another miserable month in November as a slump in home sales deepened.

Contract sales by the country’s top 100 developers plunged 38% from a year earlier to 751 billion yuan ($118 billion), sharper than the 32% drop in the previous month, according to preliminary data compiled by research firm China Real Estate Information Corp.

A widening debt crisis at firms including China Evergrande Group and official efforts to rein in property speculation have combined to crush home demand and hit the world’s second-largest economy, forcing authorities to ease curbs and soothe homebuyer concerns.

But the policies to relax mortgage controls and improve financing for builders have yet to stem the industry slowdown. The research firm sounded a note of caution over the sector, especially debt-laden developers.

“It is difficult to substantially improve the financing environment of those ‘problem’ real estate enterprises, and the pressure on capital turnover may continue to intensify,” CRIC said. The latest policy easing mainly benefits state-owned enterprises and “quality” private developers, it added.

Another month of weak sales will hurt confidence among investors concerned about the longer-term health of property firms just as fears emerge of a possible restructuring at Kaisa Group Holdings Ltd. Prohibitively high borrowing costs have effectively shut many developers out of the offshore debt market in recent weeks, raising the risks of defaults.

“National sales growth will remain weak for the next six to 12 months,” Moody’s Investors Service analysts wrote in a note on Wednesday. “The tight credit environment will increase refinancing risk in the sector, as investors and lenders continue to shy away from financially weak developers.”

China’s high-yield dollar bonds are set to decline Wednesday, falling about 0.5 cent in the morning, according to credit traders. A Bloomberg Intelligence index of mainland developers pared its gain to 1.3% as of 11:20 a.m. in Shanghai from 1.9% earlier. The gauge has dropped 31% this year.

China’s top 100 developers have seen a steady drop in their contract sales since July, with more than half of them registering a more than 30% year-on-year decline last month, according to the CRIC data. Home sales in China’s 29 key cities continued to decline by area in November, down 32% from a year earlier and 19% from the same month in 2019.

Although some major Chinese cities like Shanghai and Chengdu have accelerated mortgage approvals or trimmed borrowing costs, developers should continue to rely on price discounts or sweeteners for homebuyers to drive sales, CRIC said.

Citigroup Inc. analysts expect home sales to stabilize as early as March, after more details of China’s plan to levy a property tax emerge, according to a research note Wednesday.