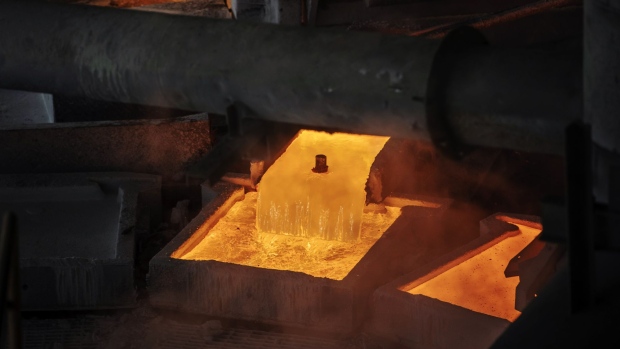 (Bloomberg) -- Commodities tumbled as China’s Covid outbreak worsened and a series of stunning street protests in cities across the nation threaten to derail economic activity and sap demand for energy, food and raw materials.

Copper futures declined as much as 2% in London before paring some losses while gold slipped with a stronger dollar. In Chicago, lean hog futures slumped as much as 3.7%, the most in a month, amid the unrest in the world’s largest pork importer. Wheat futures fell 3% to the lowest since August and cotton futures dropped as the protests contribute to already lackluster demand.

Meanwhile, soybeans reversed earlier losses after Argentina revived a currency measure Friday that would buoy its soy sales. Iron ore also bucked the trend, with futures in Singapore gaining as much as 5.6% after China said it’ll end one of its major equity fundraising bans on property developers.

The Chinese government has stepped up restrictions to contain the spread of Covid, angering residents who blame the policies for contributing to a deadly fire in Xinjiang last week. Beijing could respond by further loosening controls -- which it’s already signaled in its long-term plan -- which would boost the world’s No. 2 economy, or clamping down to quell social unrest, further dampening demand for a number of key commodities.

Analysts including Goldman Sachs Group Inc. expect China to end its Covid Zero policy earlier than previously anticipated, with chances growing of a messy exit as infections spread and residents protest virus controls, while others see a longer haul.

The uncertainty has sent investors scurrying for the haven of the US dollar, pressuring international commodities priced in the currency.

“The Covid situation in China continues to weigh on metal markets, with record cases again announced over the weekend, together with the widely reported protests,” Colin Hamilton, managing director for commodities research at BMO Capital Markets, said in an emailed note. “We expect the renewed lockdowns to hurt market confidence into year-end, and thus delay some raw materials purchases over the coming month.”

Fears over China’s worsening virus situation and the government’s curbs have overshadowed the impact of Beijing’s latest stimulus measures -- a cut in the cash buffers that banks are required to hold -- enacted Friday, according to a note from Shanghai Metals Market.

The protests come on the heels of a new set of measures that promised fewer disruptions to contain the disease. But those policies have been immediately tested by China’s worst outbreak since the pandemic began, with officials quickly reverting to lockdowns to control the spread.

Peak rush hour traffic across major Chinese cities declined sharply on Monday morning from a year ago, according to data from Baidu, a data science firm. Chinese oil demand could drop to an average of 15.11 million barrels a day in the fourth quarter, down 4.5% from the same period last year, according to an estimate by Gregory Lackner, an oil products analyst with Kpler.