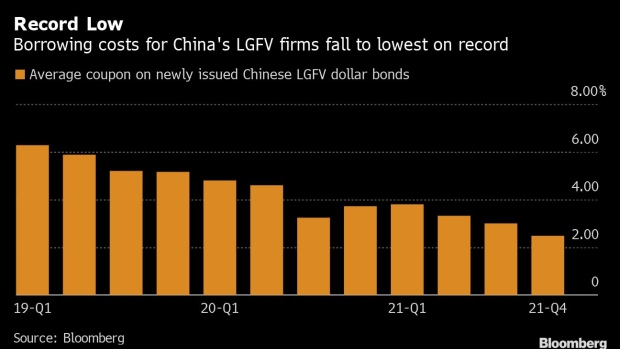 (Bloomberg) -- A key part of China’s credit market is doing better than ever, even as riskier developers get hammered by a slowdown in the sector.

Local government financing vehicles -- which finance roads, bridges, subways and even some property development -- have won average coupons of 2.5% on newly issued dollar bonds so far in October. If sustained, that would be the lowest on record for any quarter ever. In contrast, developers are paying an average of about 10%.

The seeming irony of LGFVs cutting financing costs even as China’s broader real estate market goes through one of its toughest patches in years is largely down to the following: The entities are state-backed unlike their private-sector developer peers, even if some are also laden with debt. Many also have higher credit scores than those junk-rated property firms.

Demand has also grown for LGFV notes in the domestic market. That’s pushed spreads between LGFV and five-year sovereign yuan bonds carrying AA- ratings to the narrowest in nine months.

Local financing units aren’t without their own risks, however. China’s State Council -- or cabinet -- said earlier this year that it wants failing LGFVs to restructure or go bust if they can’t repay their debts. There have been a number of LGFVs that have had liquidity crunches recently, including one in Lanzhou city in central China.

But unlike their developer peers, no LGFVs have ever defaulted on publicly traded dollar bonds. That alone sets them apart at a time when at least three developers have done so this month alone.