Canadian home prices to drop 10% or more over next 12 months: Capital Economics

Canadian home prices fell for the first time in two years as a rapid rise in interest rates looks set to threaten one of the world’s hottest housing markets.

Benchmark home prices declined 0.6 per cent in April from the month before, the first drop since April 2020, according to data released Monday from the Canadian Real Estate Association. The number of sales, meanwhile, plunged 12.6 per cent.

The shift is coming as the Bank of Canada embarks on an aggressive campaign of rate increases to fight inflation running at a three-decade high. Markets are betting that the policy interest rate, which began the year at 0.25 per cent, will have to rise to 3 per cent over the next year.

The sharp jump in Canadian home prices since the pandemic -- they’re up 24 per cent over the past 12 months -- was partly driven by emergency-low rates that helped the economy through the COVID-19 crisis. But now rate increases have left the nation’s housing market looking increasingly vulnerable. 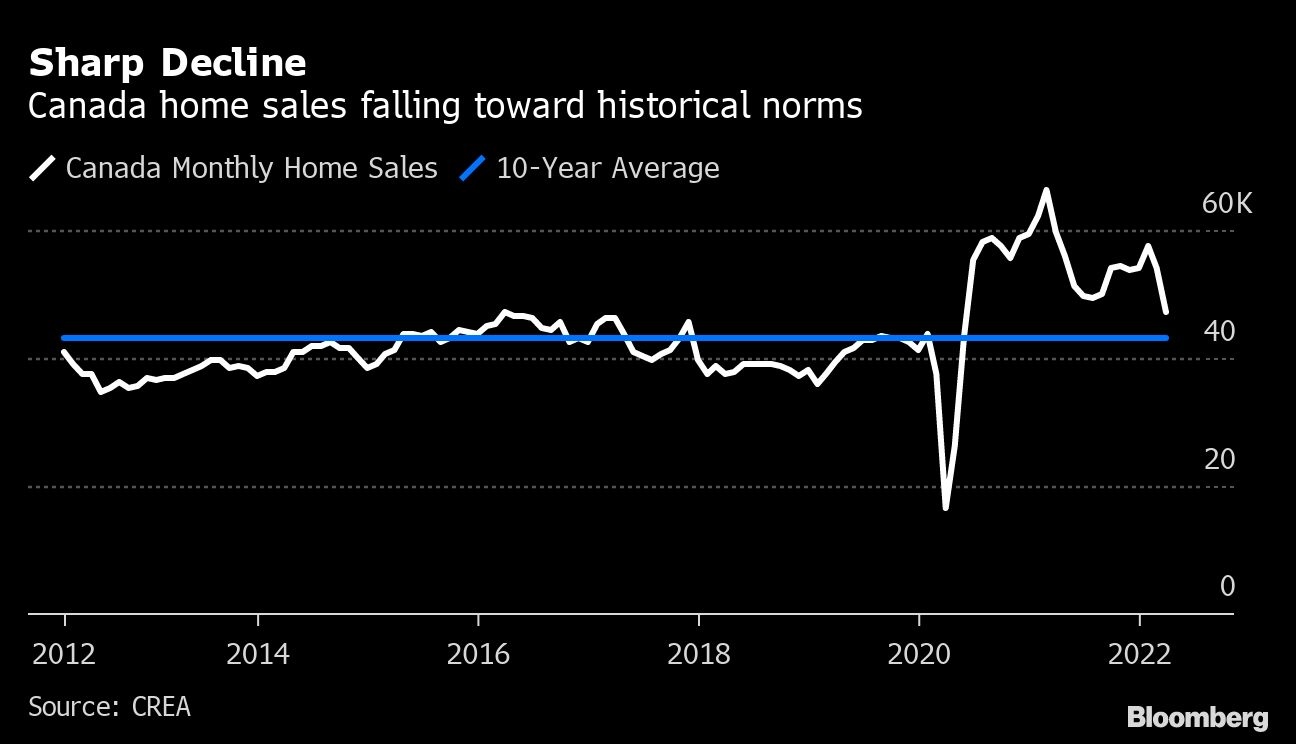 “Following a record-breaking couple of years, housing markets in many parts of Canada have cooled off pretty sharply over the last two months, in line with a jump in interest rates and buyer fatigue,” Jill Oudil, chair of the real estate association, said in a news release accompanying the data.

An inflationary surge is being seen around the world as supply chain problems combine with higher commodity prices caused by Russia’s invasion in Ukraine. Assets from stocks to bonds to cryptocurrencies have plunged in recent weeks as policymakers everywhere scramble to drain stimulus from the economy and get consumer prices under control. A separate release Monday showed Canadian consumer confidence posting its sharpest weekly drop since April 2020.

In the housing market, last month’s price declines were heaviest in the smaller communities around Toronto that saw some of the steepest gains through the pandemic as remote work allowed buyers to look further afield. The suburbs of Oakville and Milton saw benchmark prices decline 5.6 per cent in April from the month before, while prices in the city of London, Ontario, about a two hour drive from Toronto, declined 4 per cent, the data show.

The slowdown in sales activity, meanwhile, was broad-based, with 80 per cent of local markets nationwide posting a monthly decline in transactions, the data show.

Ian Soucy, a realtor in Ottawa, said he’s been surprised by how much the market has cooled this spring. “Buyers are hesitant, just with the unknown of the interest rates rising,” Soucy said, pointing to the likelihood of another 50-basis-point hike in June. Entry-level townhomes that were “flying off the shelves” as recently as a couple months ago are now sitting on the market for a few weeks, he said.

Nevertheless, even in the midst of the current slowdown Canada’s housing market remains historically tight.

The country has just 2.2 months of inventory available right now, compared to a longer term average of five months, the data show. But this metric has been moving up, and the ratio of sales to new listings -- another measure of market tightness -- fell to 66.5 per cent in April. In its release, the real estate board said that ratio was approaching a level traditionally signaling the market is shifting to buyers from sellers.

“After 12 years of ‘higher interest rates are just around the corner,’ here they are,” Shaun Cathcart, the real estate board’s senior economist, said in the press release. “But it’s less about what the Bank of Canada has done so far. It’s about a pretty steep pace of continued tightening that markets expect to play out over the balance of the year.”