Resignation of CPPIB's Machin is a big loss for Canada: Claude Lamoureux

Mark Machin’s big mistake got him drummed out of Canada’s national pension manager in a matter of hours. It’s a turn of events that puts the fund in the hands of a former industrial scientist who has made few waves in the world of finance.

John Graham was promoted to chief executive officer of the Canada Pension Plan Investment Board on Friday, putting him in charge of a $373 billion global portfolio that includes everything from Britain’s Southampton port to Germany’s Axel Springer media empire to the Petco retail chain.

The fund needed a new CEO quickly after Machin was found to have flown to the United Arab Emirates, where he received a Covid-19 vaccine. He had committed a double political sin -- taking a trip in defiance of Prime Minister Justin Trudeau’s warnings to avoid international travel, and getting a shot most other Canadians can’t get because of the country’s limited vaccine supplies.

After the Wall Street Journal revealed Machin’s travel on Thursday evening, he resigned.

The board surprised some CPPIB managers by turning to Graham, who was not seen as the natural successor to Machin, according to people familiar with the situation. The organization was thrown into a situation it might not have been prepared for: Machin had been CEO for less than five years and wasn’t expected to leave soon.

But Graham is described by associates as a safe pick -- smart and sophisticated, with the cautious mindset of a Canadian public servant. He will likely follow the existing strategy of expanding international offices and investing more in private assets, these people said.

”When you look at his CV, you see credit, private markets -- that is a significant part of the future as to where that retirement-savings investment process needs to go, in order to be successful and generate net real rates of return that are high enough,” said Keith Ambachtsheer, a pension adviser who has provided strategic advice on governance, finance and investment issues to Canadian pension funds, including CPPIB. 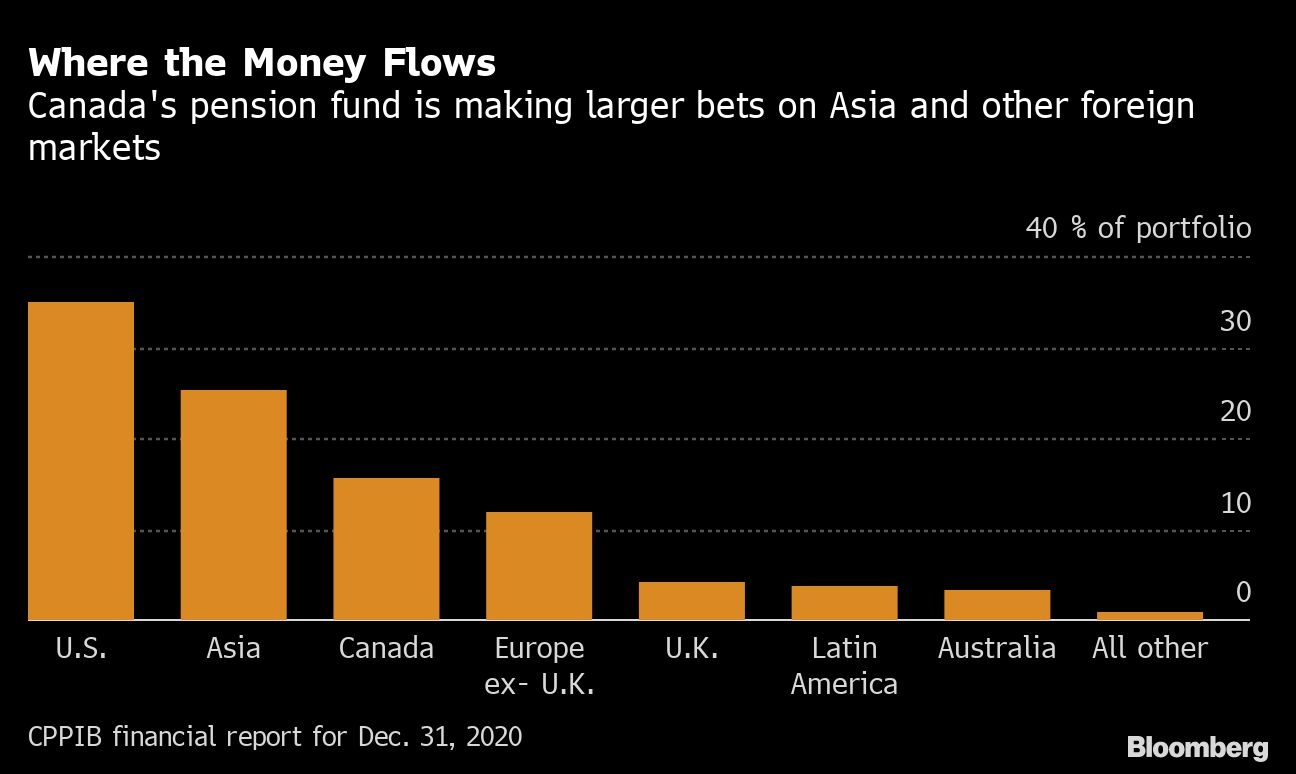 Graham, 49, spent almost a decade as a research scientist at Xerox Holdings Corp. after completing a doctorate in physical chemistry. He started at CPPIB in 2008 in the portfolio design group before switching to private investments and credit.

In 2018, Machin promoted Graham to senior managing director in charge of a credit investments team spread across Toronto, New York, London and Hong Kong. The group’s recent focus has been growing in Asia and emerging markets, particularly in China, India and Brazil.

“These are markets that are going to grow, they are going to be increasingly relevant in the global economy and it makes sense to spend time to build out capability and the infrastructure to invest,” Graham said in a 2019 interview with Bloomberg.

Graham was also in charge of making a deeper push into private credit, where borrowers bypass traditional capital markets, to fill a need for yield made scarce by low interest rates.

In an interview in December, Machin said exuberance in public markets was a signal to him to extend his fund’s already-huge bet on private assets. He had continued to build the Canadian fund’s private holdings since becoming its first foreign-born leader in June 2016.

About 25% of CPPIB’s portfolio is in private equity and another 17% in real estate and infrastructure, most of which is private, as of Dec. 31, according to fund disclosures.

The strategy is seen as a success, and the fund has returned 9.7% annualized over the past five calendar years after expenses. Almost all of that was on Machin’s watch as CEO.

But it wasn’t enough to save his job in a country where a number of public figures have blown up their careers by leaving for vacations or other discretionary reasons during the pandemic.

Ontario Finance Minister Rod Phillips was forced to resign on Dec. 31 after it was revealed he took a Caribbean vacation at a time when many businesses in the province had been ordered to shut their doors. A cabinet minister in Alberta, Tracy Allard, quit her post after she went to Hawaii.

Nearly a year into the pandemic, “there’s a tremendously fragile public that is out there that is not going to have a lot of tolerance for CEOs who are seen to be flouting the rules,” James Moore, an adviser for law firm Dentons and former Canadian cabinet minister, said in an interview on BNN Bloomberg Television.

That may explain why Finance Minister Chrystia Freeland’s office rebuked Machin for his Dubai trip, despite a government practice of saying as little as possible about CPPIB’s operations. The fund’s top executive reports to a government-appointed board, but the directors are businesspeople including Royal Bank of Canada Chairwoman Kathleen Taylor, not political figures.

CPPIB’s board missed its chance to send the message that it is truly independent by accepting his resignation over one lapse of judgment instead of defending him, according to a senior executive of another large pension fund who asked not to be identified because he isn’t authorized to speak about the situation publicly.

Claude Lamoureux, the former head of the Ontario Teachers’ Pension Plan, said Machin should not have had to leave.

“I think if he worked for another board and not CPPIB, I’m sure the decision would’ve been different,” Lamoureux said on BNN Bloomberg. “Yes, it’s mistake but it’s not a mistake to receive the penalty it received.”

--With assistance from Sandra Mergulhao.