Canada’s labor market continued its recovery in July as health restrictions were lifted, but the gains were less than expected.

The country’s economy added 94,000 jobs last month, Statistics Canada reported Friday in Ottawa. Economists were predicting a jobs gain of 150,000. The unemployment rate fell to 7.5 per cent from 7.8 per cent in July.

The report signals the economic rebound is intact and shows companies are finding workers as pandemic restrictions vanish. The smaller-than-expected increase, though, could cast some doubt on the pace of hiring. The gains last month were largely in full-time private-sector employment, particularly among youth and women.

The numbers show the economy has more than fully recouped losses from a third wave of the pandemic that swept through the country earlier this year. July’s increase follows a 231,000 jobs gain in June; the two months reversed the 275,000 jobs lost during lockdowns in April and May.

Of the three million jobs lost at the start of the crisis, 2.74 million have now been recovered. 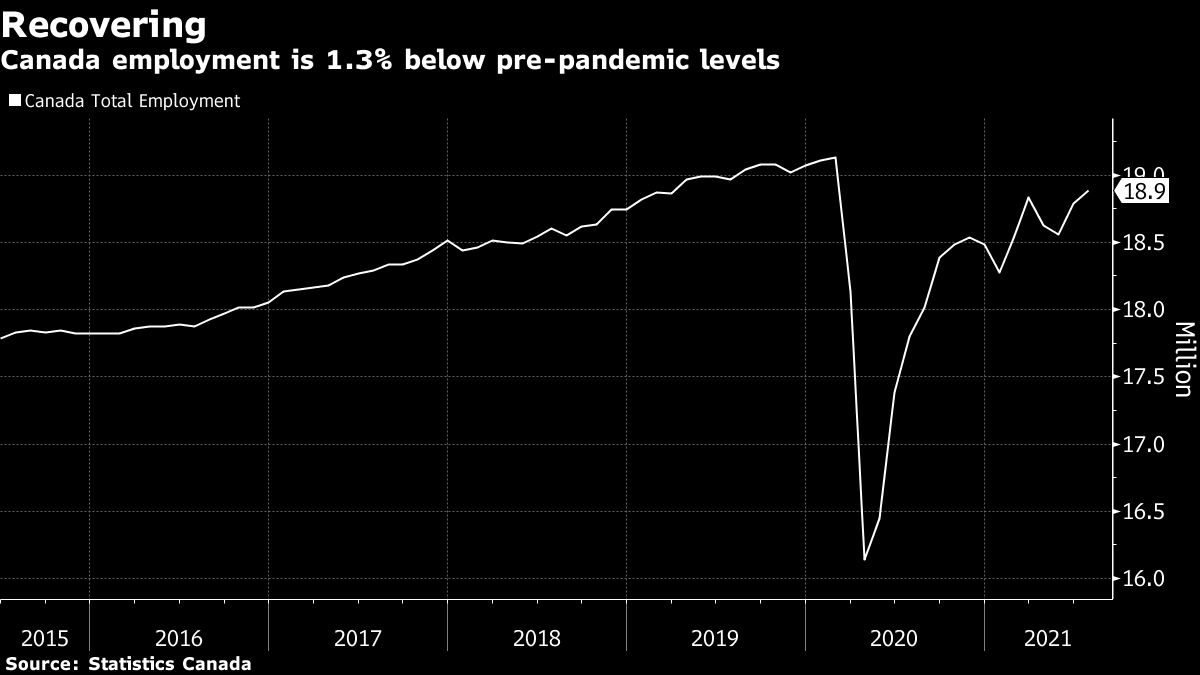 The Canadian dollar weakened following the report, down 0.2 per cent to $1.2528 per U.S. dollar at 9 a.m. in Toronto trading. Still, the Canadian dollar is one of only a handful of major currencies to post gains this year, reflecting a more aggressive paring back of monetary stimulus in Canada. That’s due in part to the country’s stronger jobs market recovery.

The Canadian jobs report coincided with the release on Friday of suprisingly strong U.S. payroll numbers, where 943,000 positions were added last month.

Despite the miss, the results aren’t expected to undermine expectations the Bank of Canada will continue pulling back on stimulus, with interest rate hikes expected next year by some economists. That’s because the quality of the new jobs appear to be high.

“The composition is a little bit more favorable,” Dawn Desjardins, deputy chief economist of Royal Bank of Canada, said in an interview on BNN Bloomberg Television. “It may be a headline miss in terms of the numbers, but having more full-time jobs created is definitely a good sign for the economy and certainly keeps the momentum building.”

The data give Prime Minister Justin Trudeau some fodder to tout his record of managing the COVID-19 crisis ahead of an election that’s widely expected to be called for next month.

Last September, the prime minister promised to create one million jobs -- an objective the country is very close to achieving. Trudeau is expected to call an election within weeks.

There are still plenty of worries, though, including a fresh wave of lockdowns amid the global spread of the delta variant.

According to the Bank of Canada, employment will need to surpass pre-pandemic levels before a complete recovery is declared, because population has grown since the start of the crisis.