Canada's tax system is a disincentive for people to invest in: Canadian Chamber of Commerce CEO

Canadian executives are bracing for an election that Prime Minister Justin Trudeau is expected to call within weeks. Their concern isn’t what the political leaders will say on the campaign trail. It’s what they won’t.

There’s a growing chorus of prominent Canadians who say the nation’s major political parties are neglecting economic growth as an issue. The world’s ninth-largest economy has been plagued by falling investment and weak competitiveness for years.

Business groups want to see a debate, and they’ve begun putting out their policy ideas before the campaign buses roll.

“The biggest, most pressing economic issue for Canada is the need for a long-term growth plan,” John McKenzie, chief executive officer of TMX Group Ltd., the parent company of the Toronto Stock Exchange, said in an interview. “Are we doing the right planning for long-term growth? Are we creating the conditions for reinvestment, for businesses to invest?”

Prior to the pandemic, high levels of immigration kept the economy expanding, but real output per capita was virtually stagnant. Productivity growth has deteriorated to historic lows.

A booming housing market has sucked away capital. Housing investment has surpassed business capital expenditures this year for the first time in at least five decades. But business investment was already falling before COVID-19. 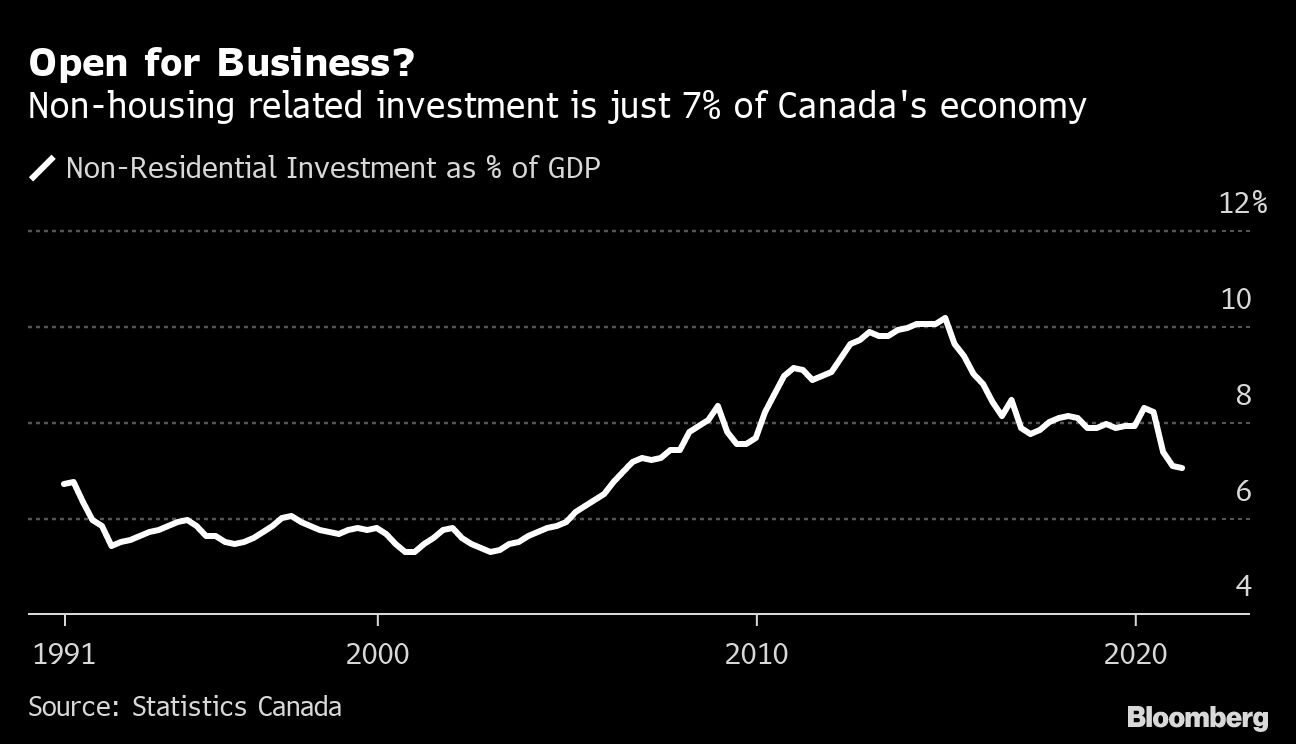 Since 2005, the nation’s real output per capita has grown by 0.2 per cent annually on average, according to Bloomberg calculations. That’s about one-tenth the pace in the period from 1996 to 2005.

Trudeau’s government has long had a testy relationship with the business community, which is wary of a cabinet that may be the most left-leaning in a generation.

But his primary rival, Conservative leader Erin O’Toole, has shared few details on how a government he leads would try to boost economic growth. And he is toying with anti-business rhetoric as he tries to appeal to working-class voters.

Working Canadians are being hit hard from multiple angles. Big government and big business are two halves of the same problem. Conservatives will fight for you and your family. pic.twitter.com/CHYh9wKFJD

“The ballot question in the election needs to be which party has a strategy for strong sustainable growth for Canada,” Perrin Beatty, chief executive officer of the Canadian Chamber of Commerce, said in a phone interview.

The chamber released a list of dozens of platform recommendations this week, calling on parties to reduce deficits and pursue other measures to lower the tax and regulatory burden for business.

Goldy Hyder, chief executive of the Business Council of Canada, an advocacy group, issued a letter to party leaders on Aug. 9 calling on them “to put forward a comprehensive plan that promotes long-term sustainable growth.”

To many, including Beatty, the proposals in Trudeau’s 2021 budget, released in April, fell short for meeting long-term growth objectives despite a $100 billion (US$80 billion) price tag over the next three years.

Others have also panned the government’s fiscal plan. Robert Asselin, a former top economic adviser in Trudeau’s government and now head of policy at the Business Council, has described the new spending as “unfocused and unimaginative.”

Asselin, a leading figure in Ottawa on advocating for long-term growth measures in policy making, and Jean-Francois Perrault, chief economist at Bank of Nova Scotia, penned an opinion piece in the Globe and Mail this week calling on all parties to resist “short-termism” in their platforms.

Finance Minister Chrystia Freeland’s office defended the government’s track record on economic issues, saying it has supported hard-hit sectors throughout the pandemic and businesses have been regularly consulted over the last 18 months.

“Our fiscal plan is prudent and responsible,” said Katherine Cuplinskas, a spokesperson for the minister’s office, via email.

Some businesses say the focus needs to remain on the immediate challenge of reopening and returning to pre-pandemic levels of activity. Hundreds of thousands of workers are still looking for employment or more hours.

“The more that we can reopen the economy in a safe way, the better off the country will be,” Sun Life Financial Inc. CEO Kevin Strain said in an interview.

But the last election campaign in 2019 -- which saw the two major parties preoccupied with mudslinging and voter handouts, and spending little time discussing the economy -- is a cautionary tale to many in the business community.

“What we need to say is, post-COVID, where do we go?” Beatty said.