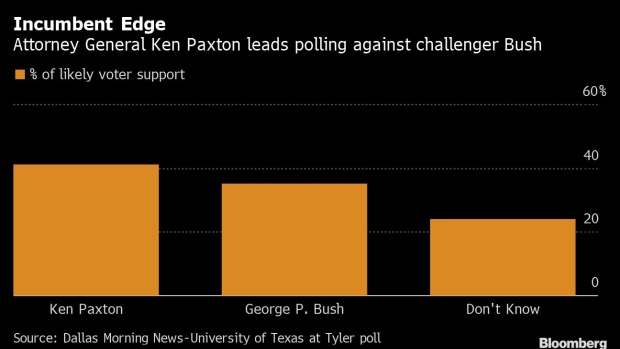 (Bloomberg) -- George P. Bush, who is seeking the Republican nomination for Texas attorney general, said he would support further efforts to limit abortion if he’s elected, including rules that would punish companies that pay for employees to travel to other states for procedures.

Bush said lawmakers should ban businesses that offer the benefit -- which he called “abortion vacations” -- from doing business with the Lone Star State. He also pledged to crack down on the practice of mailing abortion pills to Texans, which is illegal under a law that went into effect in December.

“For a lot of pro-lifers, including myself, the next fight and frontier will be taking on companies that circumvent that law,” Bush, 46, said Monday in an interview with Bloomberg News.

Texas already has some of the most severe limits on abortion in the US, and has a law in place that would almost completely ban the procedure if the Supreme Court overturns Roe v. Wade, the landmark court case that legalized abortion nationally. Since the Texas restrictions were put in place, companies including Citigroup Inc., Tesla Inc. and Match Group Inc. have set aside funding for their employees to travel outside the state to receive abortions.

The nephew and grandson of two former US presidents, and currently the head of the Texas Land Office, Bush trails the incumbent Ken Paxton in his quest to win the GOP nomination in next week’s primary runoff.

There’s currently no law prohibiting businesses in Texas from funding employees’ abortion procedures out of state. But it’s possible lawmakers will try to pass such a bill next session. In March, a state lawmaker warned Citigroup he’d introduce legislation to ban the bank from underwriting municipal bond sales if it continued with the benefit.

Such an initiative would be similar to a Texas law that went into effect in September that punishes banks and asset managers for divesting from fossil fuels. Bush said he would support a similarly structured bill to go after companies pay for employees out-of-state abortions.

Bush, who comes from a family of fairly moderate Republicans, has staked out hard-line positions on immigration, abortion and other hot-button topics during his run against Paxton. He says the incumbent is compromised by legal and ethical issues that make him vulnerable to losing in the general election. No Democrat has been elected to statewide office in Texas since 1994.