Brookfield Asset Management Inc. is single-handedly propping up the Canadian market for mergers and acquisitions, accounting for almost a third of the country’s deals this year and providing all the growth that has led the nation to outperform the US.

Toronto-based Brookfield was either a buyer or seller in about US$52.9 billion of announced deals in 2022 through May, more than five times its US$9.1 billion tally a year earlier, according to data compiled by Bloomberg. This year’s total accounts for 31 per cent of the US$171.6 billion of all deals involving Canadian companies, up from involvement in about 5.7 per cent of activity by the same point in 2021.

The world’s largest alternative-investment firms have billions of dollars of committed funds that they’re looking to deploy, and even this year’s market selloff hasn’t been enough to deter them. Transactions by Brookfield, as well as pension funds including Canada Pension Plan Investment Board, helped increase the value of deals involving Canadian companies 7.8 per cent through May, compared with a 6.6 per cent decline in the US. 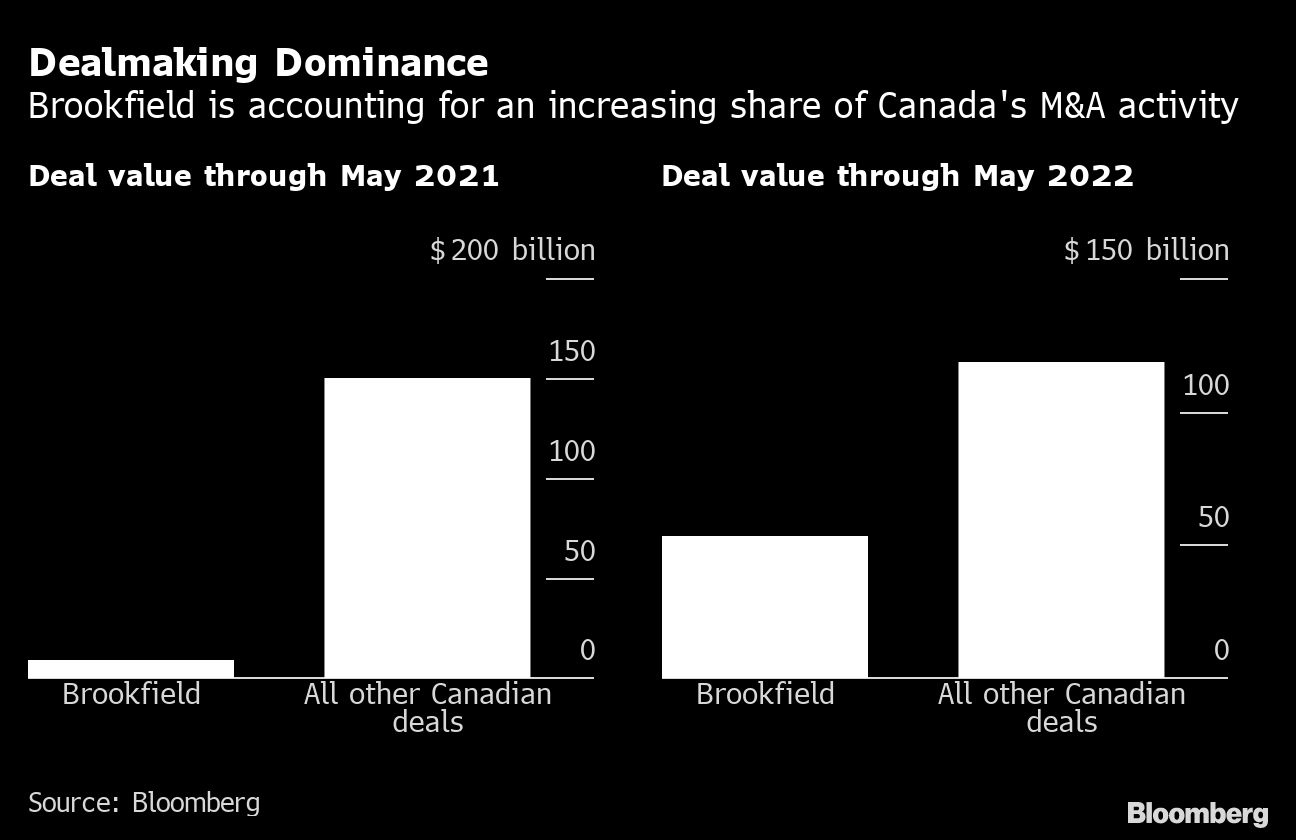 “The amount of money that private equity is managing and the amount of private capital that also sits in the pension plans, relative to the size of the Canadian market, is a material factor,” David Rawlings, chief executive officer for Canada at JPMorgan Chase & Co., said in an interview. JPMorgan was the top adviser for Canadian mergers and acquisitions through May, working on 14 deals with a combined value of US$43.6 billion, according to the data.

Excluding Brookfield’s deals this year and last, Canada’s M&A market would have been down about US$31.4 billion, or 21 per cent. Over the past year, Toronto-based Brookfield has raised US$71 billion and invested US$70 billion. The firm has sold around half that amount, according to a presentation during its annual general assembly.

Brookfield’s high-profile deals this year include the US$6.4 billion acquisition of US software firm CDK Global Inc. and the US$5 billion takeover of UK emergency household repairs provider HomeServe Plc. Brookfield also is involved in a group that is taking Nielsen Holdings Plc private in a deal that values the television-ratings firm at US$16 billion including debt. Brookfield also has been a seller, divesting a 49 per cent stake in New York’s One Manhattan West office tower.

The second half of the year may see more diversified merger-and-acquisition activity, Rawlings said, adding that JPMorgan’s deals pipeline is “strong across multiple industries.” Canada’s preponderance of mining and energy companies, which have had their balance sheets bolstered by strong commodity prices, may be active in dealmaking through the remainder of 2022, he said.

That trend may already be underway. Johannesburg-based Gold Fields Ltd. agreed to buy Toronto-based Yamana Gold Inc. for about US$7 billion in a deal that would make make the South African miner the world’s No. 4 gold producer.

“Investors have almost forced these companies to pull back on development spending,” Rawlings said. “They’re generating a lot of cash, but there still is a need for consolidation to drive efficiency, even in a strong commodity-price environment.”