It’s not a high enough quality signal to suggest the cycle bottom is in, but it does suggest a higher degree of a selling climax and the potential for a low point for at least a few months. Someone tweeted at us last week that a prominent U.S. financial media person was calling the bottom for equities. I’m not so sure, but a period of stability with both growth and inflation falling suggests markets can stabilize. When the FOMC changes their tightening bias it will also impact the timing of the outcome. We expect another 100 basis points of tightening before the Fed is able to push the pause button. The Fed reminds us, and all will know, that monetary policy transmission has long and variable lagged effects. The economic recession pain for Main Street has not hit yet and that likely still needs to play out. If inflation remains sticky, which we think it will for a few years, it will be tougher to stimulate for fiscal and monetary policy levers.

Technology (growth) stocks have led the decline. To isolate this (see green-yellow lines) we compare the NASDAQ QQQ ETF versus the S&P 500 relative performance. Currently, the QQQ is about 42 per cent of the S&P 500. We can see by comparing the May and June equity market lows, that QQQ has started to perform better (a rising line means QQQ is beating the S&P 500). Not because it did not go lower, both indexes made lower lows. But more of the broader S&P 500 stocks declined in June in reaction to the jump in consumer price index (May data). This is not a pound your fist on the table and throw things at the TV camera bull signal. But it does suggest a broader based selling climax. To be fare, I expected the May lows would hold, but that was on the assumption we would start to see inflation pressures ebb. The June swoon in commodity prices has likely solidified peak inflation pressure. We are also seeing meaningful slowing in housing cost inflation.

Growth has been anaemic for the past 6 months. We will get confirmation this week that Q1/22 GDP was down 1.5 percent and that projections for Q2/22 GDP are close to zero according to the Atlanta Federal Reserve’s Now Cast. This combination could change the FOMC narrative sooner than the market expects, as we may already be in a technical recession with 2 quarters of negative GDP. 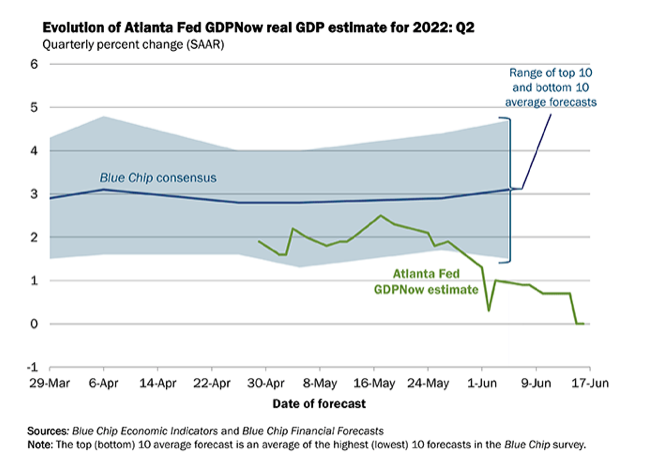 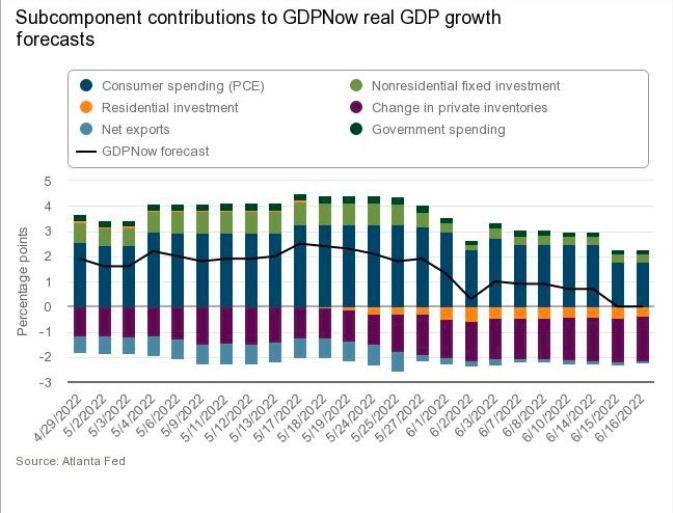 Digging below the surface, we can see that the primary cause of weaker growth is from inventories and residential construction. These are mostly supply-side output impacts. The demand side parts of GDP are on the consumption side, and as we know, the demand (volume) side of consumption has started to weaken as well but is still a net contributor. For the next few quarters, it will be about the lagged and variable economic response to rate hikes the central banks will need to judge for consumption. Historically they have ALWAYS messed this part up. If you think it will be different this time, we have a bet to make.