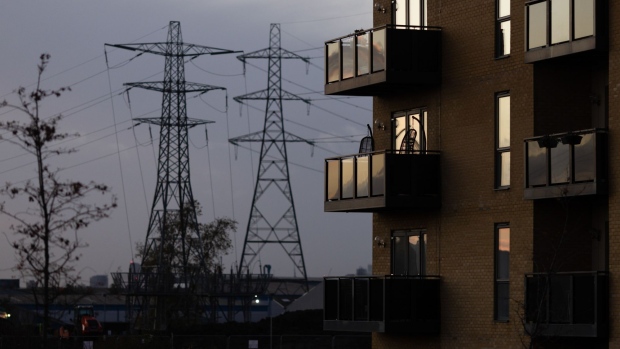 Residential apartments next to electricity pylons on the Barking Riverside development in London, UK, on Wednesday, Nov. 23, 2022. Barking and Dagenham is the only remaining London borough where house prices in the resale market have risen by double digits. Photographer: Chris Ratcliffe/Bloomberg , Bloomberg

(Bloomberg) -- The UK’s biggest energy supplier, Centrica Plc, has started a scheme to get its customers to save power when needed to help balance the grid when supplies are scarce.

Centrica’s British Gas will target more than 100,000 smart-meter households, in what it calls the the initial trial phase, asking them to try to reduce their electricity consumption by 30% during peak hours. Those that do -- for example, by not using dishwashers or washing machines during a two-hour period of peak demand -- can take as much as £100 ($119.57) of their winter power bill, the company said in a statement.

National Grid Plc is turning to households to cut consumption at times when the network is stretched this winter. A list of suppliers including EON SE are offering the scheme to their customers. The so-called demand flexibility service was almost used this week for the first time as wind generation dropped but was stood down.

While many Britons are already cutting energy use as soaring bills exacerbate the worst cost-of-living crisis in decades, the UK is lagging behind some European Union nations like France in demand-reduction measures. The UK government has only recently started rolling out a public awareness campaign that was previously canceled by former Prime Minister Liz Truss.

With Russia squeezing gas flows to Europe, energy firms are looking for ways to reduce consumption and keep the market in balance, especially in the event of a severe cold snap or a slump in wind generation.

Customers can opt out at any time from the British Gas Peak Save trial, which runs from December to March. Centrica, which earlier this year brought back the UK’s biggest fuel storage after a five-year halt, expects the plan to go beyond this heating season as Europe’s gas market could get even tighter next year without normal Russian flows.

“This approach to help manage residential electricity demand is likely to become a major feature of the market in years to come,” Centrica Chief Executive Officer Chris O’Shea said in the statement.