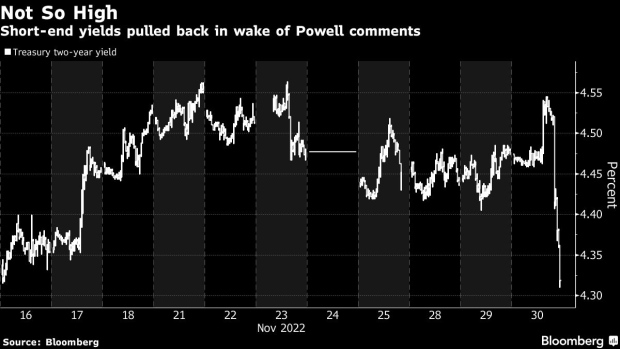 (Bloomberg) -- Bond traders dialed back their expectations for how high they think the Federal Reserve might need to push its benchmark in the wake of fresh comments from central bank boss Jerome Powell, with swap markets suggesting the key overnight rate might peak below 5%.

Treasuries rallied across the curve, with securities in the front-end and belly leading the way after chair signaled a downshift in the pace of central bank tightening in December. While he cautioned that more rate hikes are yet to come, the yield on the policy sensitive two-year yield fell as much as 16 basis points to a session low of 4.31%. The Treasury rally picked up speed late in New York with yields falling to their session lows, as traders closed their books for November and investors added bonds to their portfolios.

US stocks ripped higher, with the S&P 500 adding 3.1% and the Nasdaq 100 jumping 4.6%. The tech-heavy index has been pummeled by rising rates all year. The dollar slumped versus major peers, capping its worst month since May 2009.

The bond market cemented expectations for the Fed to slow the pace of policy tightening in December and raise rates by 50 basis points at its upcoming gathering, instead of at the 75-basis-point clip it’s been running at for its past four decisions. Swaps suggested the terminal rate for this cycle will be around 4.94%, some time in the middle of 2023.

“The time for moderating the pace of rate increases may come as soon as the December meeting,” Powell said at an Brookings Institution event. He also underscored that the Fed doesn’t want to crash the economy through rate hikes and that officials want to avoid overtightening. That countered market expectations that the Fed chair would convey the hawkish tone heard in his public appearances since Jackson Hole in late August and most recently at this month’s policy meeting.

The market “likes what Powell is saying after they expected the Fed chair would maintain the hawkish tone we heard at this month’s meeting,” said George Goncalves, head of US rates strategy at MUFG. “He didn’t drop the hammer on being hawkish.”

Powell said officials will look at changes in financial conditions and how they impact the economy, but didn’t push back on the recent easing.

“He dovishly shifted his risk tolerance from asymmetrically favoring over-tightening to now becoming more sensitive to the growth risks of doing so,” said Simon Harvey, FX analyst at Monex Europe. “This fed straight into the markets confirmation bias and thus sparked life back into the risk-on rally.”

The rate moves undid shifts from earlier in the day that saw yields move higher in the wake of various economic data, including gross domestic product figures and numbers on job openings. Bond investors will now look ahead to a slew of other releases this week, including the Fed’s favored inflation measure, a key manufacturing gauge and the all-important monthly jobs report. Over the horizon, consumer-price inflation figures will also be critical, with the next reading in that series due just before the Fed’s final two-day meeting for the year in mid-December.

While inflation is seen retreating from a four decade peak, the extent of a sustained downward trajectory in US consumer prices remains highly uncertain into 2023, with implications for the path of Treasury yields.

Noting the market call for a peak around 5% in Fed policy next year, Ed Al-Hussainy, rates strategist at Columbia Threadneedle Investments said “a lot of things have to go right for that to come true.”

“Inflation will really have to ease quickly towards 2%, and if there’s one thing I have learned this year, it’s to be skeptical about inflation,” he said.

Trading flows were influenced late in the session by month-end related buying. The yield on 10-year notes fell 14 basis points to below 3.60%, with the benchmark poised to end the month at its lowest level since early October and also well below the current Fed policy band of 3.75% to 4%.

“The risk of recession and overtightening by the Fed has helped 10-years get below 4%,” said Goncalves at MUFG. “But back-end yields do not make sense at current levels. If you think a softish landing is possible, then long end rates have to rise.”