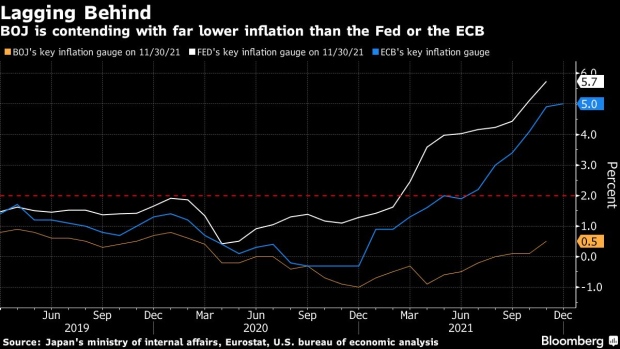 A Japanese national flag flies outside the Bank of Japan (BOJ) headquarters in Tokyo, Japan, on Monday, Sept. 14, 2020. The Bank of Japan left its bond-purchase amount unchanged at a regular operation on Monday. , Bloomberg

(Bloomberg) -- The Bank of Japan stood pat on policy and adjusted its view of inflation risks for the first time since 2014 in a move that suggests the economy is not entirely immune to the price forces prompting other major central banks to pull back pandemic stimulus.

The BOJ kept its negative interest rate, bond yield target and asset purchases unchanged at the end of its meeting Tuesday, a widely forecast decision given an overall inflation pulse that remains far weaker than in the U.S. and other major economies.

Still, with energy costs surging, the bank nudged up its forecasts for prices in the year starting in April and the following year, and changed its view of the inflation risks they face. The adjustment, also widely expected, signals that the bank now sees the possibility of inflation outstripping their projections, not just undershooting them.

The moves show that the global wave of inflation prompting action from the Federal Reserve and the Bank of England has also reached Japan’s shores, albeit with less impact so far.

Instead of a surge in prices across the board, inflation in Japan remains limited to specific items such as fuel and cooking essentials as companies continue to absorb the fastest rising costs in decades rather than risk losing business with higher price tags.

That means the extraordinary stimulus the BOJ has been pumping into the economy since well before the pandemic is likely to continue for now.

The yen weakened against the dollar to briefly reach 114.83 from 114.53 immediately before the decision. The move suggests investors viewed the overall outcome as indicating BOJ policy will continue on a path of divergence from the Fed.

In its quarterly outlook report, the BOJ raised its projections for the next two fiscal years, but still didn’t see inflation near its 2% target anytime in a projection period that ends in early 2024, about a year after Haruhiko Kuroda is set to retire as the bank’s governor.

For the 12 months starting in April, the bank said it now sees inflation of 1.1%, up from the 0.9% it projected three months ago. In the year after that, it sees inflation staying around 1.1%.

The quarterly forecasts show that the BOJ still doesn’t see the kind of price gains seen overseas for years to come.

Still, the bank’s changed stance on inflation risks indicates it is more open to the possibility that prices could rise at a faster-than-expected pace, an outcome that has been repeatedly seen elsewhere in the world.

The BOJ’s decision comes amid a sharp surge in omicron cases that poses a new risk to Japan’s economy, at least in the short term.

While case counts and fatalities are still low compared with the U.S. and elsewhere, Prime Minister Fumio Kishida’s government is reportedly weighing whether to place Tokyo and neighboring prefectures under a quasi-state of emergency to impose stricter Covid-19 measures.

Reflecting a delay in Japan’s recovery, the BOJ cut its growth forecast for the current fiscal year ending March, while raising next year’s projection.