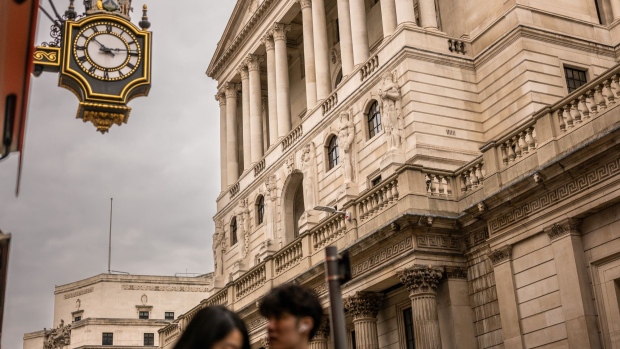 The facade of the Bank of England in London, UK, on Wednesday, Sept. 21, 2022. The Bank of England on Thursday is set to raise interest rates and start selling assets built up during a decade-long stimulus program, a historic tightening of monetary policy designed to clamp down on inflation. Photographer: Jose Sarmento Matos/Bloomberg , Bloomberg

The Bank of England’s stress tests are meant to provide an unlikely ‘tail risk’ scenario designed to test the resilience of British lenders. The current UK market turmoil means this year’s scenario is looking increasingly plausible.

The scenario released Monday amid a UK sell off includes the UK base rate rising rapidly to 6% in early 2023 before gradually falling back to under 3.5%, the Bank of England said in a statement. While that level has been set as a theoretical test, it is no longer as far-fetched as it was before Friday’s mini-budget, with traders earlier ramping up bets on BOE rate increases and seeing the key rate peaking at 6.25% by November 2023.

The Bank is reintroducing its annual cyclical scenario after pausing the process because of the Covid crisis and Russian invasion of Ukraine. The test also includes looking at how well banks would cope with UK GDP contracting by 5.0%, unemployment more than doubling to 8.5% and residential property prices falling by 31%.

The conditions “applied under the ACS is not a forecast of macroeconomic and financial conditions in the UK or abroad,” the central bank said in the release. “It is not a set of events that is expected, or likely, to materialise.”

But the current extreme market movements have made the details appear more likely. “Normally you would think there’s a low probability of this happening,” said Keith Church, chief economist of credit risk consultancy 4most. “The severity of the scenario hasn’t changed but the likelihood of it occurring has.”

Last year, the UK’s eight largest lenders all passed a pandemic-focused stress test, concluding they can weather a double-dip recession and Covid-19 societal adjustments that last for years.

This year, the aim is to test the resilience of the UK’s banking system under a range of hypothetical circumstances including “deep simultaneous recessions in the UK and global economies, large falls in asset prices and higher global interest rates, and a separate stress of misconduct costs.”

For the first time, the 2022 test will assess the ring-fenced subgroups of participating banks on a standalone basis.

The 2022 stress tests will cover a five-year time period, with a start point of end-June 2022, the bank said. The results of the test will be published in summer 2023.

A spokesperson for the BOE declined to comment outside the release.