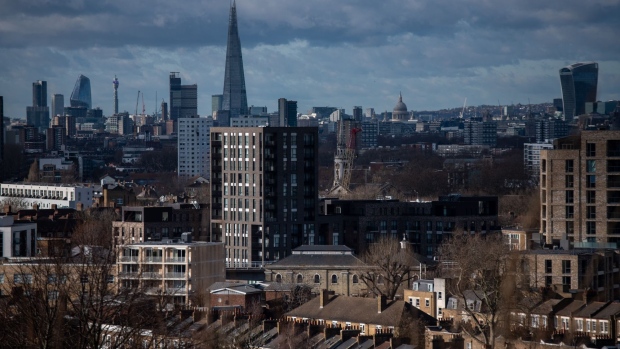 The Shard skyscraper on the skyline beyond residential property in London, U.K., on Tuesday, Feb. 1, 2022. U.K. house prices registered their strongest start to the year since 2005 but the property market is set for a slowdown as the cost of living crisis intensifies, according to Nationwide Building Society. Photographer: Chris J. Ratcliffe/Bloomberg , Bloomberg

(Bloomberg) -- British Columbia Investment Management Corp. and Preservation Capital Partners are considering a sale of BMS Group that could value the insurance broker at more than £600 million ($720 million), people familiar with the matter said.

The investment firms are working with Evercore Inc. to evaluate strategic options for the business, the people said, asking not to be identified because the matter is private.

BMS generates about £100 million in annual earnings, according to the people. Financing for a deal is attracting the interest of both banks and private debt providers, they said.

Deliberations are ongoing and there’s no certainty they will result in a sale, the people said. Representative for Preservation Capital and BCI declined to comment. Spokespeople for BMS and Evercore couldn’t be reached for comment.

London-based BMS helps corporations looking to buy a range of specialty insurance and reinsurance products, according to its website. BCI and Preservation Capital invested in BMS in 2019 at a valuation of £500 million.

Insurance brokers are attractive targets for private equity firms as they aren’t required to maintain large regulatory capital buffers. The fragmented nature of the industry also allows for expansion through acquisitions. The businesses are often sold between buyout firms, with valuations sometimes based on aggressive assumptions about future revenue.

--With assistance from Dinesh Nair.