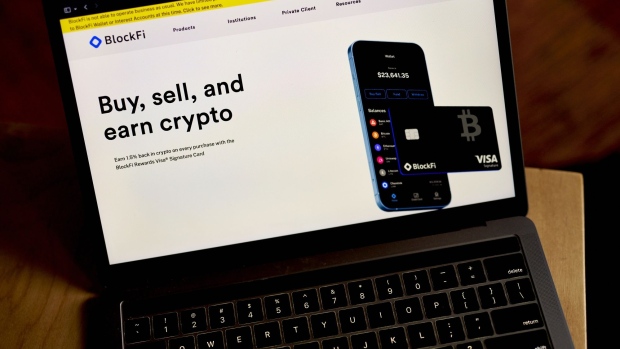 The BlockFi website on a laptop computer arranged in the Brooklyn borough of New York, US, on Thursday, Nov. 17, 2022. Cryptocurrency lender BlockFi Inc. is preparing to file for bankruptcy within days, according to people with knowledge of the matter who asked not to be named because discussions are private. , Bloomberg

(Bloomberg) -- The US Securities and Exchange Commission is one of the largest creditors to BlockFi, which filed for bankruptcy in the wake of a number of failures within the digital-assets space.

The regulator has a $30 million unsecured claim against the crypto lender, according to a filing Monday. That makes it BlockFi’s fourth-biggest creditor, behind Ankura Trust Company, which is listed as being owed more than $729 million; West Realm Shires Inc., which is the entity that operates FTX US and which is owed $275 million; as well as an unnamed customer due more than $48 million.

Ankura acts as a trustee for BlockFi’s interest-bearing crypto accounts, according to its website.

BlockFi’s bankruptcy is the latest in a string of crypto firms that have gone bust amid a plunge in digital-asset prices as well as the recent meltdown of crypto-exchange FTX, as well as a handful of important projects and firms that combusted earlier in the year.

BlockFi said in a statement that it will use the Chapter 11 process to “focus on recovering all obligations owed to BlockFi by its counterparties, including FTX and associated corporate entities,” adding that recoveries are likely to be delayed by FTX’s own bankruptcy. Chapter 11 bankruptcy allows a company to continue operating while working out a plan to repay creditors.

“The only surprise is it took this long, given that when your white knight gets slayed by a dragon of their own making, it’s only a matter of time until you also perish in the fire,” said Max Gokhman, chief investment officer at asset manager AlphaTrAI, which has crypto funds.

BlockFi was founded in 2017 by Zac Prince and Flori Marquez and in its early days had backing from influential Wall Street investors like Mike Novogratz and, later on, Valar Ventures, a Peter Thiel-backed venture fund as well as Winklevoss Capital, among others. It made waves in 2019 when it began providing interest-bearing accounts with returns paid in Bitcoin and Ether, with its program attracting millions of dollars in deposits right away.

But regulators worried that customers didn’t understand how much risk they were taking on when participating in crypto-lending projects. In July 2021, securities regulators for Alabama, Texas, New Jersey, Kentucky and Vermont brought actions against BlockFi alleging that the company was offering unregistered securities. In February, BlockFi agreed to pay $100 million to the Securities and Exchange Commission and state regulators over allegations it illegally offered a product that pays customers high interest rates to lend out their digital tokens.

Now the main US securities regulator will need to wait in line to get paid, just like all the other creditors.

--With assistance from Jeremy Hill.