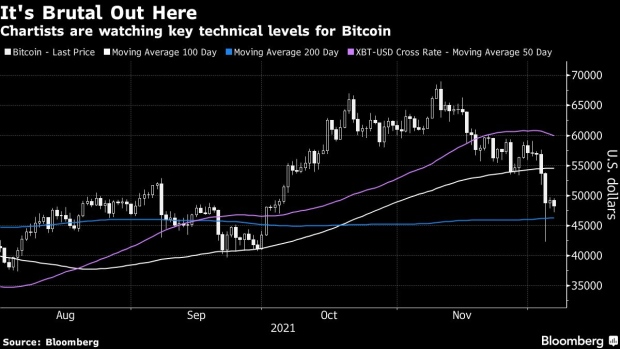 (Bloomberg) -- Bitcoin climbed back above $50,000 as traders comb through the wreckage of this weekend’s flash crash.

Bitcoin has bounced back above its 200-day moving average after slumping as much as 22% on Saturday. Technical analysts say the next key level to watch, should it start to rally, would be its average price over the past 100 days. Still, any selloff could see support at the 200-day average price around $46,300 followed by $40,000.

The largest cryptocurrency “saw a bit of a ‘flash crash’ on Saturday morning,” wrote Matt Maley, chief market strategist for Miller Tabak + Co. It wasn’t able to bounce back above $50,000 and it has broken below its trend-line from July lows, he added.

Bitcoin and other cryptocurrencies dove this weekend amid a greater risk-off sentiment that also encompassed selloffs in many areas of the U.S. stock market. It happened as spiking inflation is forcing central banks to tighten monetary policy, threatening to reduce the liquidity tailwind that lifted a wide range of assets. Some so-called alternative coins have been hit hardest -- XRP is down roughly 17% since Friday, Bloomberg data show.

“Since we believe that at least some of the strong rally the cryptos have seen since the 2020 pandemic lows was due to the excess liquidity sloshing around the system, the fact that they have been hit quite hard since the Fed disclosed their intentions to make that liquidity less plentiful in a more aggressive fashion, the recent drop in cryptos should be considered a warning signal for other asset classes,” Maley said.

Meanwhile, Ether, which fell below its 100-day moving average during the selloff, could find resistance around its average price over the last 50 days, though its support lies around $3,500. Still, it held up better relative to Bitcoin over the past few sessions -- from peak to trough in the decline, Bitcoin plunged 39%, while Ether fell 28%.

“The market seems to be pricing in a world where central banks move to fight inflation -- but some of the sub-sectors of online living continue to grow such as the metaverse, NFTs, defi, etc.,” said Stephane Ouellette, chief executive and co-founder of crypto platform FRNT Financial Inc.

“There is a sentiment of uncertainty across all markets as we approach the end of the year,” said Chris Kline, COO and co-founder of Bitcoin IRA. “This is a healthy pullback as all markets look to readjust to the new Fed policies, inflation, and Covid concerns. Inflation is not going away anytime soon and investors are taking note of that, looking to hedge with tools like crypto.”