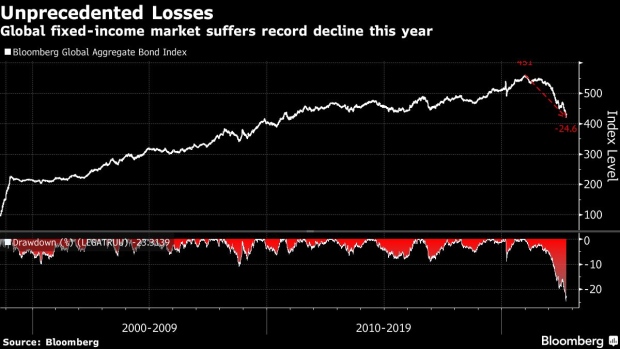 (Bloomberg) -- Bill Gross and his former colleagues at Pacific Investment Management Co. can agree on at least one thing: bonds are attractive now.

Why? Because the market is now pricing in the Federal Reserve’s key borrowing costs will peak at 4.5%. That’s too high, according to Gross, the co-founder of Pimco who was ousted from the bond powerhouse in 2014.

Fed Chair Jerome Powell can’t afford to keep raising rates to slay inflation in the way his predecessor Paul Volcker did in the 1980s, because the US economy is much more leveraged now and global growth is slowing, Gross wrote in his latest outlook. That means the two-year Treasury yield, currently at 4.2%, is too high and rates across the curve have reached a “temporary” peak, he said.

His view is in line with a growing number of investors, including those at Pimco, who are finding value in bonds after the global fixed-income market suffered an unprecedented 19% loss this year.

While “inflation is the Fed’s seemingly solitary focus at the moment, economic growth and financial stability may soon gain equal measure,” Gross, the 78-year-old former bond king wrote. “Ever-increasing leverage is the culprit. The US and other economies cannot stand many more rate increases.”

Gross co-founded Newport Beach, California-based Pimco in 1971 and rose to the pinnacle of the financial world after building it into a fixed-income behemoth. In 2014, he shocked the financial world by abruptly leaving the firm following clashes with other executives. Five years later, he retired from the asset management business.

He remains active in expressing market views, mainly through the investment outlook published on his website.

On Thursday, Gross said his personal portfolio is “increasingly leaning toward a small percentage of medium-term bonds.”

An inverted yield curve -- when short-term rates rise above longer-term yields -- increases the risk of a downturn because banks will be reluctant to lend, choking off the credit flow, according to Gross. The potential damage from the current inversion, or negative carry, could be bigger than previous recessions because of the higher debt load.

“The longer and wider the negative carry, the deeper the recession,” he wrote.

For investors who are gun-shy after the brutal bond losses this year, Gross advised: buy the iShares TIPS exchange traded fund (TIP), which invests in inflation-linked bonds.

Yields on five-year Treasury Inflation-Protected Securities, or TIPS, reached 2% on Sept. 30, a level last seen in 2008. TIPS not only offer protection against inflation, they also provide the potential for capital appreciation should rates fall, said Gross.