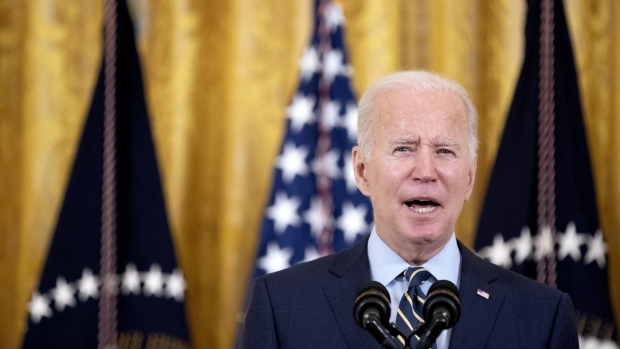 U.S. President Joe Biden speaks on prescription drug pricing in the East Room of the White House in Washington, D.C., U.S., on Monday, Dec. 6, 2021. Biden is looking to sell his economic agenda to the public this week, speaking today about how his tax and spending plan aims to reduce the cost of prescription drugs. , Bloomberg

(Bloomberg) -- The U.S. and European allies are weighing sanctions targeting Russia’s biggest banks and the country’s ability to convert rubles for dollars and other foreign currencies should President Vladimir Putin invade Ukraine, according to people familiar with the matter.

The sanctions -- including against some of Russia’s biggest banks and the Russian Direct Investment Fund -- are among the options that President Joe Biden may spell out when he speaks with Putin on Tuesday, according to the people. The U.S. could also restrict the ability of investors to buy Russian debt on the secondary market, they said.

The options were described by two people familiar with the matter who asked not to be identified discussing private deliberations. The most drastic option would be to bar Russia’s access to the Swift financial payments system, but that would wreak havoc on ordinary citizens so officials are more inclined to go after Russia’s ability to convert rubles into dollars, euros or British pounds, the people said.

The Biden-Putin call comes with tensions high over what U.S. intelligence has told allies could be a plan to invade Ukraine with as many as 175,000 troops in the coming year. Russia has denied plans to go to war but has also said U.S. and European nations should scale back their support for Ukraine, establishing de facto “red lines” that include barring the former Soviet republic from joining the NATO alliance.

It’s not clear how much detail Biden will share with Putin on the possible sanctions that would follow an invasion, and most of the actions would be contingent on agreement from allies.

Overall, the measures Biden is considering are part of an American effort to claw back some of the leverage Putin has amassed over Ukraine and, more broadly, the U.S. and its European allies. The Russian leader has made clear that he’s willing to invade Ukraine -- his forces did so in 2014 -- to protect what he sees as vital national security interests, and he has shown a willingness to tamper with energy markets by threatening to cut supplies to Europe.

Why Russia-Ukraine Tensions Are So Hard to Defuse: QuickTake

“The reason Putin has so much leverage is he’s clearly willing to pay the price,” Matthew Rojansky, director of the Kennan Institute at the Wilson Center in Washington, said of past U.S. moves to sanction Russia that had little effect. “But we’ve got loads more ammunition, there’s lots of stuff we could do. It’s just that no one has ever believed we would go to those lengths.”

Biden’s Tuesday call with Putin, which will be the pair’s fourth conversation since the U.S. president took office in January, is also meant to provide a way to defuse tensions that have crested again after an earlier Russian troop buildup in the spring first raised fears of war.

“The goal here is signal lots of action up front so you do don’t have to do it, but making sure the threat is credible,” Rojansky said.

A senior Biden administration official, speaking to reporters on Monday, made clear that the U.S. doesn’t want to commit its troops to Ukraine in the event of a Russian invasion. At the same time, the official said the U.S. would help Ukraine and send more forces and capabilities to NATO allies bordering Russia. The official also declined to detail the steps the U.S. would take if there’s a Russian invasion.

How Europe Has Become So Dependent on Putin for Gas: QuickTake

The call will help determine whether Biden’s desire for a functioning relationship with Russia is possible or whether the dynamic will just ricochet from crisis to crisis -- including cyberattacks, the potential invasion of Ukraine and continuing disputes over Russia’s provision of energy to Europe.

Last week Biden previewed his interest in taking a tougher approach, saying, “What I am doing is putting together what I believe to be will be the most comprehensive and meaningful set of initiatives to make it very, very difficult for Mr. Putin to go ahead and do what people are worried he may do.”

Ukrainian President Volodymyr Zelenskiy said in a tweet Monday that he had spoken with U.S. Secretary of State Antony Blinken and they “agreed to continue joint & concerted action.”

Blinken tweeted that he assured the Ukrainian president that “U.S. support for Ukraine is unwavering” and “there will be serious consequences for any escalation from Russia.”

From the Biden administration’s view, a more positive turn of events could see the U.S. having a stable relationship with Russia -- one where the two nations’ embassies and consulates are fully staffed, and where Russia helps bring Iran around to the idea of rejoining the 2015 deal that put limits on its nuclear program. The U.S. could also play some role in getting Moscow and Kyiv to finally adhere to the 2015 Minsk agreements that were meant to bring the Ukraine conflict to an end.

For Putin, the goal is partly the meeting itself: He gains legitimacy and international sway the more he interacts with Biden, demonstrating Russia’s continued prowess on the global stage. It’s a strategy that has worked for him, evidenced by the four conversations he’s had with Biden since January, more than most world leaders.

Russia has played up the significance of the encounter, with Kremlin spokesman Dmitry Peskov saying it will be the equivalent of an in-person meeting and more substantial than a simple phone call.

Putin will listen “with great interest” to Biden’s proposals on Ukraine,” Peskov said. “Let’s at least hope that the leaders will be able to get their concerns across, clearly formulate those and respond.”

Putin’s main demand -- binding guarantees from the U.S. and its allies that NATO won’t expand farther east and won’t deploy weapons there that Russia considers a threat -- isn’t likely to get very far with Biden. The U.S. president over the weekend rejected the Kremlin’s “red lines” over Ukraine as out of hand.

But with tensions along the Ukraine-Russia border soaring, any high-level talks are helpful, said Rachel Ellehuus, a senior fellow at the Center for Strategic and International Studies in Washington.

“Biden will have to offer Putin some sort of an off-ramp to deescalate the situation,” Ellehuus said. On the decision to engage, she said, “It keeps people talking and avoids the worse consequence which is military confrontation.”

The deliberations underscore just how intertwined Russia’s role as an energy supplier to Europe is with its security posture toward Ukraine, which has transit agreements for Russian gas. Energy is also a potential source of leverage: Continued Russian aggression could reshape the fate of the completed but not yet operational Nord Stream 2 pipeline, which the Biden administration hasn’t tried to stop even though it opposes the project.

“I think Nord Stream 2 is very much on the table,” said Steven Pifer, a research fellow at Stanford University’s Center for International Security and Cooperation. Biden still has options to impose broader sanctions, he said. “There are things that you can do to greatly ratchet up the pain.”

One crucial result of the call will be a better understanding of what exactly Putin wants. While U.S. officials say the intelligence suggests Putin is planning for a major ground invasion of Ukraine, they say the administration doesn’t know with confidence what the Russian leader is planning -- and don’t believe he’s made any final decision.

That uncertainty is a tactic Putin has used for a long time.

A key challenge for Biden is one of force posture -- he will have to persuade Putin that stepped up economic pressure would bring the sort of pain that previous sanctions regimes haven’t, while essentially conceding that the use of U.S. forces isn’t really on the table.