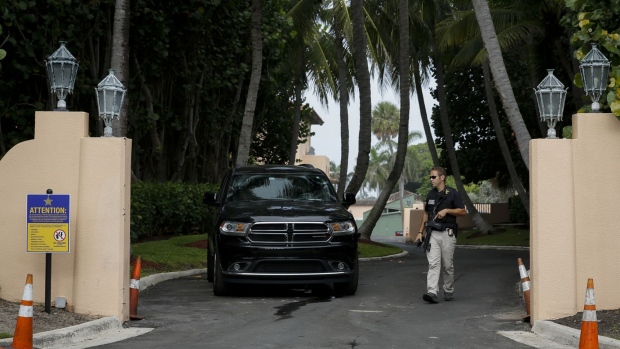 A member of US Secret Service at the entrance of former US President Donald Trump's house at Mar-A-Lago in Palm Beach, Florida, on Aug. 9. Photographer: Eva Marie Uzcategui/Bloomberg , Bloomberg

(Bloomberg) -- President Joe Biden and White House aides were not given a heads up or briefed on the FBI raid on former President Donald Trump’s Mar-A-Lago estate and learned about the search from public reports, press secretary Karine Jean-Pierre said Tuesday.

“The Justice Department conducts investigations independently and we leave any law enforcement matters to them,” Jean-Pierre said. “It would not be appropriate for us to comment on any ongoing investigations.”

Federal investigators searched the former president’s Florida residence as part of a probe into whether he removed classified documents from the White House when he left office, according to a person familiar with the action.

Trump lambasted the search in a statement Monday, complaining about “the weaponization of the Justice System” by Democrats “who desperately don’t want me to run for president in 2024.”

Jean-Pierre said that Biden believed investigations “should be free from political influence” and has held to that commitment as president.

Republican lawmakers have criticized the unprecedented search of Trump’s home, accusing the Department of Justice of playing politics.

“The Department of Justice has reached an intolerable state of weaponized politicization,” House Minority Leader Kevin McCarthy, a California Republican, said in a statement. “When Republicans take back the House, we will conduct immediate oversight of this department, follow the facts, and leave no stone unturned.”