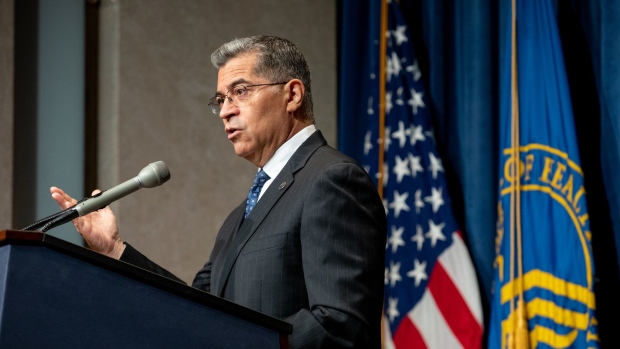 US President Joe Biden displayed on a screen during the SelectUSA Investment Summit in National Harbor, Maryland, US, on Monday, June 27, 2022. The summit dedicated to promoting foreign direct investment (FDI) and has directly impacted more than $57.9 billion in new US investment projects, according to the organizers. , Bloomberg

(Bloomberg) -- President Joe Biden is under pressure from progressive Democrats to safeguard access to abortion in states where it’s at risk of being outlawed -- including by allowing clinics on federal land and offering travel vouchers to people who want the procedure.

Yet Biden faces steep legal and political hurdles in meeting those demands as his administration struggles in its response to last week’s Supreme Court decision overturning the landmark Roe v. Wade precedent. The frustration among Democrats was on display Tuesday as Health and Human Services Secretary Xavier Becerra announced an initiative to assure availability of abortion medication.

“My apologies,” he told reporters in Washington. “We can’t tell you there’s a silver bullet.”

Biden has taken some modest steps, including those announced by Becerra and a separate directive by the Office of Personnel Management that federal employees can use sick leave to travel for medical care or accompany family members to obtain care in another state.

But many of the measures pushed by Democrats would require action in Congress, where they would need Republican votes to get legislation through the Senate, and face restrictions on the use of federal funds. Experts say the scope of the Dobbs v. Jackson ruling curbs much of the action on the executive front.

“They are really limited in terms of what the will be able to get done,”said Alina Salganicoff, senior vice president and director of women’s health policy at the Kaiser Family Foundation. “The enormity of this ruling really limits the federal government’s capacity to act on this issue.”

Here are some of the actions Democrats have proposed along with the obstacles they face:

The group of senators in their letter to Biden after the leak of Justice Samuel Alito’s majority opinion in Dobbs v. Jackson Women’s Health, asks, among other things, that the Department of Justice and other agencies should “analyze the types of reproductive health services that could be provided on federal property.”

“Open abortion clinics on federal lands in red states right now. Right now,” she said at a rally in New York on Sunday.

However, it’s not clear what such a move would entail. The Department of Defense and the Department of Veterans Affairs maintain medical facilities but there is a longstanding prohibition, known as the Hyde Amendment, that prevents using federal funds to pay for abortion, except to save the life of the woman, or if the pregnancy arises from incest or rape.

The White House largely dismissed the idea of using military bases or other federal property to provide abortion services. White House press secretary Karine Jean-Pierre said Tuesday that opening clinics at federal facilities could put women and providers at risk prosecution in states where abortion is now illegal if they are not federal employees.

“We understand the proposal is well intentioned,” she told reporters. But “there’s actually dangerous ramifications to doing this.”

Becerra called the Supreme Court’s decision “despicable” but predictable, and said his department is committed to increasing the access to abortion medication like mifepristone. But he refrained from promising to make it part of Medicaid’s Family Planning Program because of legal restraints.

“We’re gonna stay within the confines of the law, even though it’s a law that I personally believe jeopardizes the health of women,” Becerra said.

However, states could move to restrict the drug. Becerra said his department would work with the Justice Department to ensure access.

Out of State Abortion Services

The Democratic senators and others called for the administration to “explore” providing travel vouchers and other support for individuals seeking services in states where it is legal.

That move likely would draw a court challenge on the basis of the Hyde Amendment restrictions on using federal funds for abortion in most circumstances.

Ocasio-Cortez and others are calling for a variety of legislative responses, including expanding the Supreme Court, repealing the Hyde Amendment and enshrining in law the right to contraceptives and same-sex marriage.

House Speaker Nancy Pelosi said in a letter to Democratic lawmakers Monday that the chamber would explore legislation to protect personal data in reproductive health apps and reinforce the right of Americans to travel freely throughout the country without interference. She said the House would again pass a bill that would enshrine the right to an abortion into federal law.

However any such action taken by the Democratic-controlled House still would have to overcome a significant hurdle in the Senate: the agreement of at least 10 Republican senators to advance any such legislation. That means any action in the House would be largely symbolic.

Because of that, many Democrats are focusing on the November election and urging voters to expand the party’s control of the House and Senate. That, too, would be an uphill battle in a midterm election year.

“We have to recognize that there’s a limit to what executive actions can actually do,” Democratic Senator Tina Smith of Minnesota said in a statement. “That’s why I’m focused on ensuring that in the future we have 52 senators willing to pass legislation restoring reproductive rights.”