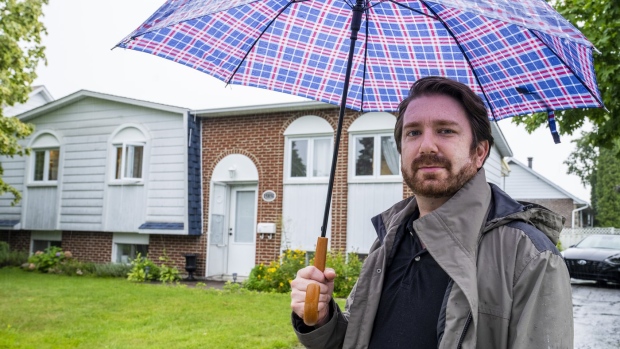 Alexander Nachaj is seen in front of his new home in Saint-Hyacinthe, Que., on Tuesday, August 23, 2022. When Nachaj needed to wire a down payment on a house, he didn't worry much about it and went down to his local bank to send it along to the notary but wasn't expecting what happened next. , THE CANADIAN PRESS/Paul Chiasson

When Alexander Nachaj needed to wire the down payment on a house, he didn't worry much about it — he just headed down to his local bank branch to send it along to the notary.

As he tells it, Nachaj made sure to ask the teller at the TD Bank branch to check the numbers twice, since he'd been required to sign a form releasing them from any liability over the $18,000 down payment. The teller then sent along the money.

And then it disappeared.

So began the Saint-Hyacinthe, Que.-based man's odyssey into Canada's wire transfer system. The vast majority of the time it successfully sends money securely and accurately, but as Nachaj discovered, it is far from foolproof.

What exactly went wrong in Nachaj’s case isn't clear, as TD declined to discuss the specifics of the case, but he says he was left without answers for many weeks about where the money had gone.

"It's mind-boggling that in this day and age, a transfer can just disappear into thin air for so long without anyone taking responsibility, or even being able to know what happened," he said.

In the meantime Nachaj was faced with losing out on his house in a hot market, so he had to cobble together another down payment with help from family, then send that money along by wire too.

“That was like walking across a tightrope or something, that was the scariest thing I think I've ever had to stand, because what if it happened again?”

The second payment went through. That was good, because part of the challenge with wire transfers is they're designed to generally be irreversible, so that the receiver can use the money with confidence right away.

"The moment there are errors, we have really big problems," said Werner Antweiler, an international finance expert at the University of British Columbia’s Sauder School of Business.

"Wire transfers are problematic because once they are in the system, they cannot be recalled and that is the nature of the beast."

It's unclear how often wire transfers go sour, but they rank among the top five bank product complaints at the Ombudsman for Banking Services and Investments with about 30 instances last year, and top 10 among all complaints at the rival ADR Chambers Banking Ombuds Office.

While the numbers are fairly small, the amounts in question are often large. Most complaints also don't make it to the external ombuds, including Nachaj's, where a couple of months later the bank's internal investigation led to the return of his original wire transfer.

TD spokeswoman Caroline Phémius said in an email that when a transfer goes astray it works with its customers to attempt to retrieve the funds.

"When there is a discrepancy in a wire transfer, we take it very seriously as we value the trust our customers place in us."

The risks around a wire transfer, and the inability to verify ahead that it is going to the right place, are enough that many notaries avoid using them if possible.

“I don't encourage our members to move money via wire, simply because if it goes sideways, they're going to hold us responsible,” said Daniel Boisvert, president of the B.C. Notaries Association.

Boisvert said a more verifiable system would be great but in the meantime, his staff still head to the bank as much as three of four times a day to deposit physical bank drafts. And while he thinks large deals like buying a house are best done in person, there are alternatives such as co-ordinating with a lawyer in another city who can accept the bank draft.

The other big reason Boisvert avoids wire transfers is outright fraud. The Canadian Centre for Cyber Security has warned in recent years of an uptick of criminals intercepting emails and inserting their own account details, to which the unsuspecting client then sends along the money.

There are solutions emerging to at least reduce the risk of errors, and fraud. The United Kingdom rolled out a system in 2020 called Confirmation of Payee, where the sender checks that the name and account number line up before confirming the payment. And SWIFT, which runs the system that underpins many international wire transfer, earlier this year started offering payment pre-validation that checks the validity of the beneficiary account before sending money.

Canada could also improve the reliability of wire transfer payments by joining the International Bank Account Numbers system in use by over 80 countries, as professor Antweiler has advocated for. The system provides more standardization to reduce errors, and has check digits that are used to run an algorithm to detect common mistakes, he said.

Such a change would require buy-in from all the banks, and errors still happen under the system, noted Payments Canada, which runs the Canadian wire system on behalf of banks and credit unions.

Canadians sending a wire transfer should be vigilant in checking the account, branch and institution numbers needed for a transfer. The numbers can be verified on a void cheque, while the receiver can also call their financial institution to double-check and the sender would do well to call the receiver to do the same.

But be aware that even the most vigilant systems will have gaps. Citigroup Inc. learned that the hard way in 2020 when, rather than sending along a small interest payment on Revlon's debt, it sent the whole US$900 million debt. It's still fighting to get a large chunk of it back.

For Nachaj, he said he plans to stick with good old paper cheques and bank drafts the next time he needs to move money.

“Don't do a wire transfer unless you have to, just because I don't feel like I have a lot of faith in that part of the system right now.”