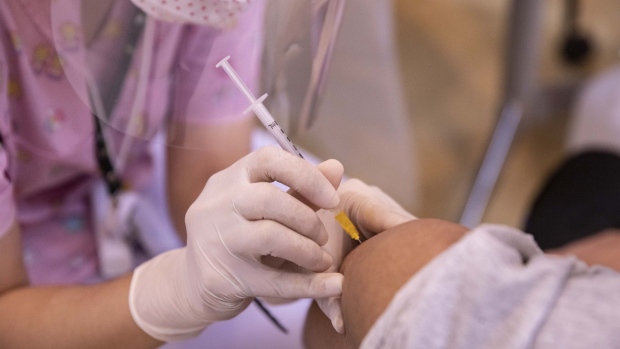 A health worker administers a dose of the Pfizer-BioNTech Covid-19 vaccine to a schoolchild during a vaccination drive for 12 to 18 year olds with preexisting conditions ahead of the re-opening of schools, at the Vachira Haospital in Bangkok, Thailand, on Tuesday, Sept. 21, 2021. As the pandemic grinds through its second year, with Thailand suffering a brutal hit from the delta variant, the government's "living with Covid-19" strategy aims to revive the economy -- while concurrently limiting fallout from the virus. Photographer: Andre Malerba/Bloomberg , Bloomberg

(Bloomberg) -- The staff of the Food and Drug Administration said the benefits of Pfizer Inc. and BioNTech SE’s Covid-19 vaccine for young children likely outweigh its risks, ahead of a meeting next week where experts will weigh whether the shot should be cleared for use.

According to the staff report, which was posted on the FDA website late Friday, the vaccine’s capacity to prevent hospitalizations and deaths likely exceed the risk of adverse outcomes such as the heart condition myocarditis, which has been reported in some younger males who have received messenger RNA shots for Covid-19.

Pfizer and BioNTech earlier this month asked the FDA to grant an emergency authorization for children age 5 to 11 to receive its vaccine. The formulation for young kids is one-third the dose of the adult shot.

The FDA’s Vaccines and Related Biological Products Advisory Committee will meet on Tuesday to evaluate the data and hear presentations from the company and health officials. The group, made up of outside scientific experts, will then make a recommendation on whether to grant an authorization.

The staff report made no explicit recommendation as to whether the advisers should support authorization. If the panel votes to back a clearance and the FDA agrees, it could pave the way for kids to begin getting shots by early to mid-November.

Clearing a vaccine for elementary-school age children would mark a major milestone in the pandemic. It is like to provide peace of mind for many concerned parents and for kids themselves, and could open the door to resume activities that have been on hold since Covid-19 first began to spread in the U.S.

However, in contrast to the initial wave of demand for shots when they were first cleared for adults, there is evidence that some parents could be slower to get shots for their children.

A poll conducted by the Kaiser Family Foundation in September, before Pfizer first revealed results from its trial of the 5-11 vaccine, found only about 34% of parents would vaccinate their kids right away when a shot was authorized for the age group.

The FDA also posted documents from Pfizer on Friday in which the drug company said that the reduced-dose vaccine was 90.7% effective at preventing symptomatic disease in kids in a study.

Additionally, data from an additional 2,250 children enrolled in the trial as part of an expansion requested by regulators found no new safety problems.

The staff report said that side effects for younger children were similar to older groups who had received the shot, and included pain at the injection site, redness and swelling. Reactions such as fever, fatigue, headache, chills, and muscle pain were generally reported less frequently and were milder than in people 12 and older.

The FDA’s myocarditis risk-benefit estimates in young kids were based on modeling various scenarios for Covid incidence and assuming an 80% efficacy of the shot preventing hospitalization in young kids, similar to the real-world efficacy in adults during the period when the delta variant was circulating.

In the efficacy portion of the trial, 1,305 kids without prior evidence of Covid-19 received two shots, while 663 got placebo injections. Among those who got the vaccine, there were three cases of symptomatic disease starting a week after the second shot, compared with 16 cases in the placebo group.

Symptoms were milder in the cases that occurred among vaccinated kids, with none developing fevers. Most of the cases occurred in August and September, when the delta variant was becoming the dominant strain of the coronavirus in the U.S.