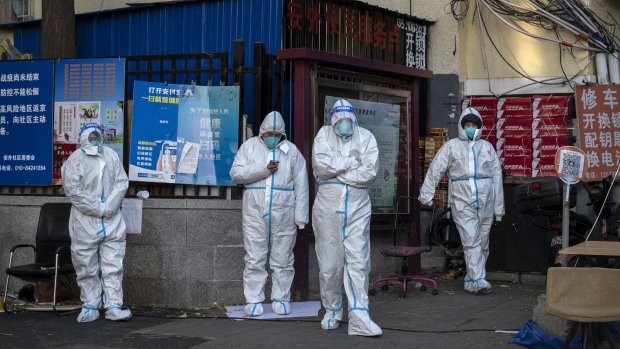 (Bloomberg) -- Beijing will allow some virus-infected people to isolate at home, starting with residents of the city’s most-populous district, a landmark shift that reflects the pressure officials are under from a record outbreak and public opposition to Covid Zero.

Low-risk patients can do home isolation for a week if they choose, people familiar with the plans said, dialing back a nationwide policy that has seen everyone with Covid sent to government quarantine sites regardless of severity, to halt transmission chains.

The shift has already begun in Chaoyang district -- home to some 3.5 million people as well as foreign embassies and company offices -- and it will act as an example for other districts to follow, the people said, asking not to be identified discussing an order that’s not yet public.

Tight resources and a need to prevent social unrest are behind the shift, according to the people. Those who take part must sign a letter committing to not going outside their homes during the quarantine period, and their doors will be fitted with a magnetized sensor that sends an alert to the authorities when it’s opened, one of the people said.

Those allowed to home quarantine include people with special physical or living conditions, such as pregnant women, one of the people said, as well as those strongly resistant to going into government-run isolation, according to the people.

Calls to the Beijing city government and its health commission weren’t answered.

The move, which diminishes the level of control officials have over infected people, comes as Beijing experiences its largest outbreak of the pandemic, with more than 5,000 cases reported on Wednesday. The temporary quarantine centers built to house infected people are running out of capacity, the people said.

The shift also follows protests across China at the weekend against the country’s strict approach to containing the virus, known as Covid Zero.

China has signaled a transition away from the harshest Covid curbs in recent days, re-emphasizing a revised playbook that relies more on targeted measures to control the virus than the sweeping lockdowns and blanket testing regimes that have become the norm over the past three years. That approach, which worked in snuffing out Wuhan’s initial outbreak, has become harder to maintain since the arrival of the more infectious omicron variant and is taking an increasing toll on the world’s second-largest economy.

Rhetoric from top government and health officials indicates they are looking to prepare the Chinese population for wider spread and a potential exit from Covid Zero. They are prioritizing bolstering lagging vaccination rates among the elderly, one of the biggest roadblocks on the country’s reopening path. China is also considering rolling out a fourth vaccine dose, Bloomberg News reported Wednesday.

Given Beijing is the capital and heart of Communist Party power, it’s reasonable to expect other cities to follow suit in allowing home quarantine. Chinese stocks in Hong Kong spiked on the news, and the yuan extended gains onshore.

Outgoing Vice Premier Sun Chunlan -- the leader that besides President Xi Jinping has been most closely associated with Covid Zero -- struck a new tone at a meeting with the NHC and other health experts in Beijing on Wednesday.

“As the omicron variant becomes less pathogenic, more people get vaccinated and our experience in Covid prevention accumulates, our fight against the pandemic is at a new stage and it comes with new tasks,” she said.

Fear of being transported to what many view as quarantine camps has seen Beijing’s streets deserted as the outbreak intensified. Conditions at the sites, often constructed hastily with pre-fab buildings, shipping containers and even tents, can be very poor. Close contacts of people infected with Covid are also required to go into government facilities, though some cities have been easing that rule this week.

Fear of Quarantine Camps, Not Covid, Is Shutting Beijing Down

The southern Guangdong province said earlier this week that close contacts who meet certain requirements can remain at home instead of going to centralized isolation facilities. Its capital, the manufacturing hub Guangzhou, later replaced lockdowns in four districts with more targeted restrictions, adding to cautious optimism China’s mindset around Covid has turned a corner.

--With assistance from Dong Lyu.