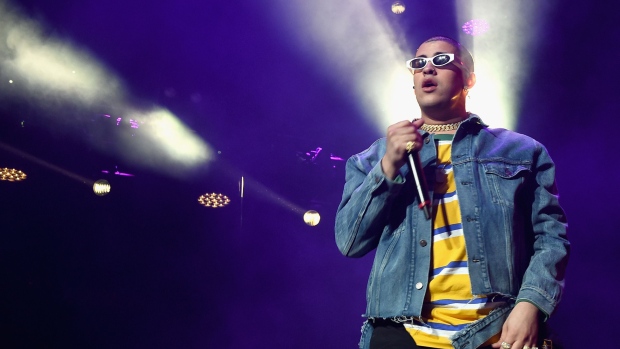 (Bloomberg) -- Bad Bunny spent much of 2022 on the appropriately-titled “Word's Hottest Tour.” He also was the year’s hottest artist on Spotify.

Taylor Swift, Drake, The Weeknd and BTS, the K-pop supergroup, rounded out the top five most-streamed artists globally of the past year. As It Was by Harry Styles was the most-streamed song both globally and in the US. And Swift’s Midnights, which debuted Oct. 21, is already the fourth most-streamed album in the US this year.

Bad Bunny — otherwise known as Benito Antonio Martínez Ocasio or by his first name, Benito, to fans — topped Bloomberg’s Pop Star Power Rankings this year, thanks to a mix of album sales and streams as well as ticket sales. His 2019 tour grossed $36.9 million, and his 2022 tour has broke all-time concert gross records in cities across the US, according to Billboard’s October Boxscore report.

The rapper is at the forefront of the rapidly growing Latin music market, particularly in the US. Revenue for the genre exceeded $510 million in US retail stores in the first half of 2022, according to a midyear report issued by the Recording Industry Association of America. That’s a 23% increase from the same time period in 2021. The bulk of revenue came from streaming and paid subscriptions like the one Spotify offers in particular.

Bad Bunny is also set to join the ever-expanding Marvel universe as El Muerto in an upcoming Sony Pictures project. The film is slated to be released in 2024.