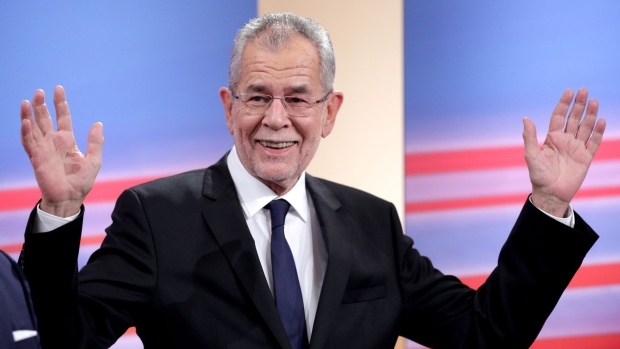 Alexander Van der Bellen, presidential candidate of Austria's Green Party, reacts after a TV debate in Vienna, Austria, on Sunday, Dec. 4, 2016. A Green Party-backed independent, Van der Bellen, defeated the Freedom Party's Norbert Hofer to become Austria's next president, beating off a challenge by an anti-immigration candidate who had threatened to sour Austria's ties to the European Union. , Bloomberg

(Bloomberg) -- Austrian President Alexander Van der Bellen will seek a second term as he looks to prolong the largely ceremonial mandate he’s fulfilled as one of the few stable points in a turbulent era for the country’s politics.

“I am again running for the office of federal president,” Van der Bellen said Sunday in a series of Twitter posts.

“The corona pandemic, the Russian war of aggression in Ukraine, the associated difficult situation for our economy, the climate crisis -- our country and all of Europe are experiencing turbulent times,” said Van der Bellen. “Therefore, I would like to continue to put my experience at the service of our country.”

A ballot will likely be held in the second half of the year. Austria’s president is elected in a two-round system, with a run-off between the top two candidates if no-one receives more than 50% of the vote in the first round.

Van der Bellen, 78, a chain-smoking economics professor and former speaker from Austria’s Green Party, has one of the highest approval ratings of the nation’s politicians. It’s uncertain if the country’s two largest parties, the People’s Party and the Socialists, will field candidates of their own.

In a video promoting his candidacy on Sunday, Van der Bellen pledged to continue to fight for democratic values and the environment. “Nationalists will seek to grab power if we let them,” he said.

Van der Bellen has presided over turbulent years in the country, including the publication of the so-called Ibiza video that toppled ex-Chancellor Sebastian Kurz’s first government with the far-right Freedom Party. The ensuing corruption investigations later engulfed Kurz himself.

In the past year Van der Bellen has sought to keep afloat a fragile conservative-green coalition cabinet despite two government crises. Austria’s voters have shown little appetite for what would be the third parliamentary elections in six years.