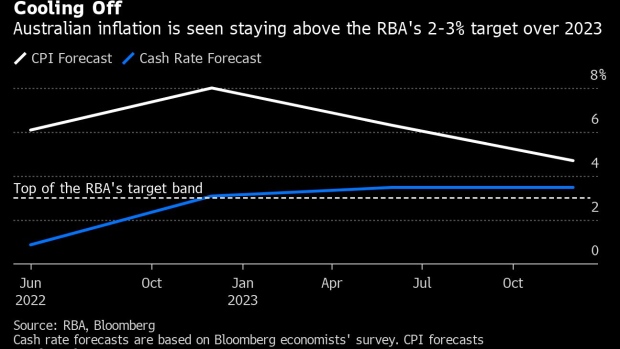 (Bloomberg) -- Australia’s central bank is “playing with fire” in signaling a higher tolerance for inflation by slowing the pace of policy tightening and trying to deliver a soft landing, said Sally Auld, chief investment officer at JBWere Ltd.

The Reserve Bank has downshifted to quarter percentage-point interest rate hikes and indicated a willingness to pause to gauge the impact of its moves. That comes even as inflation is forecast to peak at 8% this quarter and not expected to return to the RBA’s 2-3% target until 2025.

“It feels like they are playing with fire a little bit,” said Auld, who was moderating an economists’ panel at the Australian Securitisation Forum in Sydney on Thursday. “But the payoff is a pretty good one if they can achieve that.”

The RBA was a first-mover in slowing the pace of tightening and Governor Philip Lowe has expressed confidence he can slow consumer prices without tipping the A$2.2 trillion ($1.5 trillion) economy into recession. He points to Australia’s still contained wages growth and beign inflation expectations, unlike counterparts in the US and UK, to justify that view.

Economists expect the RBA will raise rates by a quarter-point to 3.1% at its meeting on Tuesday. They then see two more moves to 3.6% before a pause, a Bloomberg survey shows.

Auld and her fellow panelist Felicity Emmett, a senior economist at Australia & New Zealand Banking Group Ltd., are more hawkish and predict the cash rate will climb to 3.85% next year.

“The RBA does seem very keen to hang on to some of the gains they have made in the labor market,” said Emmett, referring to a jobless rate at a 48-year low of 3.4%.

“But they will be taking a risk that inflation expectations don’t become unanchored because it will be a very long period of inflation outside the target band.”

Louis Kuijs, chief Asia-Pacific economist at S&P Global Ratings, accused central banks including the RBA of “trying to have your cake and eat it too” by drawing out the struggle against inflation.

“We’re going to have a few years of 4, 5, 6% inflation and they expect us to keep those very low inflation expectations and I worry that will come back to haunt them.”