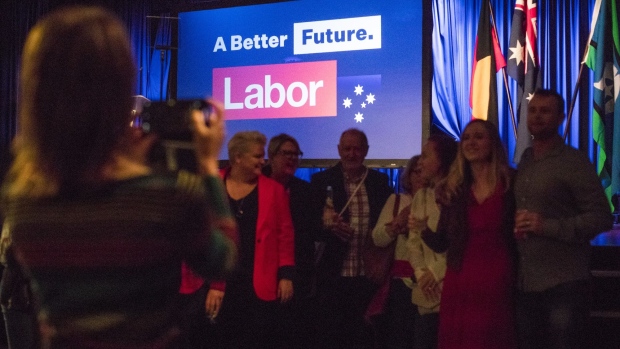 Anthony Albanese, leader of the Labor Party, leaves a polling station in Sydney, Australia, on Saturday, May 21, 2022. Australian voters began casting their votes Saturday in a national election that might see the opposition Labor Party narrowly beat the ruling Liberal National coalition. , Bloomberg

Australia’s Labor Party is set to take power for the first time since 2013, as voters booted out Prime Minister Scott Morrison’s conservative government in a shift likely to bring greater action on climate change and a national body to fight corruption.

The Labor Party led by Anthony Albanese was projected to win enough seats to form a government in Saturday’s election, even if it falls short of a majority in the 151-seat parliament, according to the Australian Broadcasting Commission. The broadcaster said it won at least 71 seats, five short of a majority.

Albanese, a career politician with working-class roots, is poised to inherit an economy with record-low unemployment that is also facing the fastest price gains since June 2001. He’s promised to increase wages for workers, improve the social-safety net and do more to fight climate change in a nation that exports more fossil fuels than any country apart from Russia and Saudi Arabia.

Morrison’s coalition trailed the Labor Party in opinion surveys throughout the campaign as it vied for a fourth term in office, with the nation’s 26 million people becoming frustrated over his management of the pandemic and his handling of climate-change related natural disasters. In the final Newspoll survey before the election, Morrison’s net approval rating was nearly three times lower than his opponent.

Albanese will face an immediate foreign-policy test, as Australia’s leader is set to head to Tokyo to participate in meetings of the Quad alongside President Joe Biden, Japan’s Fumio Kishida and Indian Prime Minister Narendra Modi. The grouping of democracies has picked up momentum in recent years as a key bloc countering China’s growing economic and military might in the region.

Although Morrison sought to present Albanese as soft on China, the Labor party adopted a very similar policy to the government toward Australia’s largest trading partner. Ties between the nations have soured in recent years as Morrison called for a probe into the origins of Covid-19 and sought to stem Chinese political interference, leading to trade reprisals from Beijing.

China’s security pact with the Solomon Islands, which sits some 2,000 kilometers (1,200 miles) away from Australia, disrupted Morrison’s efforts to make national defense a key part of his campaign strategy. Labor described the announcement as Canberra’s worst foreign policy failure since World War II, with Albanese vowing to fix relations with the country’s Pacific neighbors.

While polling showed support for Labor’s campaign over the “cost of living crisis” in Australia, few inside Albanese’s team publicly predicted victory after the Coalition’s surprise come-from-behind win in 2019, which Morrison described as a “miracle.” Now the party can finally celebrate.