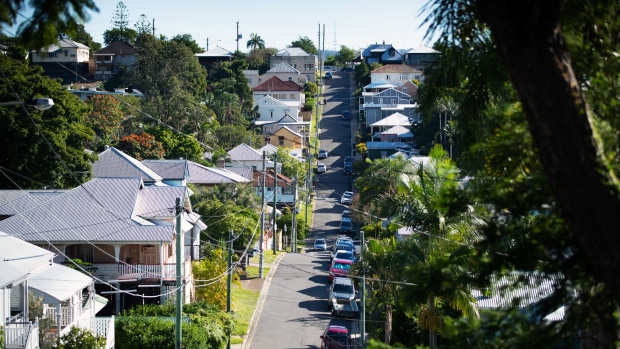 Residential properties stand along a street in Brisbane, Australia, on Tuesday, May 7, 2019. Australian central bank chief Philip Lowe dashed expectations of an interest-rate cut, looking through recent weakness in inflation to hitch the policy outlook to a labor market that he says remains strong. Photographer: Ian Waldie/Bloomberg , Bloomberg

(Bloomberg) -- Australia’s housing market advanced for a 14th consecutive month as Brisbane and Adelaide led the gains, reflecting better affordability compared to to Sydney and Melbourne, where the pace of increases cooled.

Residential property values in Australia’s major cities rose 1.1% in November, to be up more than 20% from a year earlier, according to CoreLogic Inc. data released Wednesday. Brisbane home values jumped 2.9%, the most in 18 years, and Adelaide was up 2.5%, the biggest gain since early 1993.

“Relative to the larger cities, housing affordability is less pressing, there have been fewer disruptions from Covid lockdowns and a positive rate of interstate migration is fueling housing demand,” Tim Lawless, research director at CoreLogic, said of Queensland and South Australia’s state capitals.

“On the other hand, Sydney and Melbourne have seen demand more heavily impacted from affordability pressures and negative migration.”

Housing is a hot-button issue in Australia with soaring prices raising concerns about affordability as well as financial stability risks. Data Tuesday showed mortgage credit climbed at an annual rate of 6.7% with owner-occupiers driving the growth.

In response to the persistent strength, the nation’s banking regulator recently tightened lending rules. CoreLogic noted today that since a “cyclical peak” in national price growth in March, there has been “a notable trend” toward milder gains.

“Virtually every factor that has driven housing values higher has lost some potency over recent months,” Lawless said. “Fixed mortgage rates are rising, higher listings are taking some urgency away from buyers, affordability has become a more substantial barrier to entry and credit is less available.”