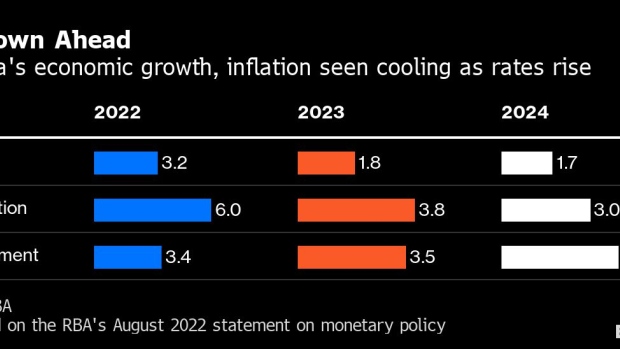 Residential buildings in Sydney, Australia, on Thursday, March 17, 2022. Sydney, scene of some of the world's fastest house-price growth, is showing early signs of turning down. , Bloomberg

Eslake, who has studied the economy for more than four decades and is a former Australia chief economist at Bank of America Merrill Lynch, sees the Reserve Bank shifting to quarter-point hikes in September.

“As things stand at the moment, I’d expect them to do three more 25s,” he said in an interview in Canberra. “It looks like they are done with 50-basis points for now.”

Eslake’s call contrasts with overnight-indexed swaps that imply at least two more half-point hikes this year, and the expectations of most economists for another 50 basis-point increase next month.

The RBA has delivered half-point hikes at the past three meetings to take the cash rate to 1.85%, accelerating a tightening cycle that began in May with rates at a record-low 0.1%.

The rate-setting board gave itself some wriggle room this month to adjust the pace of tightening, with Governor Philip Lowe saying in his statement that the board is “not on a pre-set path.”

The central bank also released a quarterly update of its economic forecasts that showed inflation would peak just below 8% later this year and only return to the upper end of its 2-3% target band in late 2024. It also expects economic growth to decelerate sharply to 1.75% late next year and then hold at that level, while unemployment edges up from very low levels.

Eslake, who now conducts independent research, agrees with the RBA’s inflation forecasts, but expects a sharper slowdown in the economy and a bigger rise in unemployment.

That’s why he sees the peak rate in this cycle coming in well below the 3.7% in April 2023 priced in by overnight indexed swaps. OIS has the cash rate at 3.35% by the end of this year.

“My hunch is that 2.5% might be enough,” Eslake said of the terminal rate. “If I’m wrong, then, maybe, between March and May next year, they will take it up to 3%. And I’m sure that will be at least enough.”

One upside to Australia’s economic outlook is a possible rapid transition to low-carbon and renewable sources of energy, said Eslake, who is based in Australia’s island state of Tasmania.

Australia is heavily reliant on mining and commodity shipments, with coal forecast to generate about A$104 billion ($74 billion) of export earnings in the year through June 30.

Since being elected in May, Prime Minister Anthony Albanese has attempted to push greater climate action in Australia, the world’s largest exporter of metallurgical coal.

He has legislated an emissions cut target of 43% by 2030 and is rolling out a strategy for greater use of electric vehicles.

Yet there are also concerns that the transition could further fuel inflation in the short-to-medium term.

“I don’t see why it has to be inflationary,” he said. “Badly handled it could be. But given the way in which the cost of renewable energy generation is coming down, I don’t see that” as being a risk.

“Obviously the additional investment has to be paid for, but I think it’s manageable.”