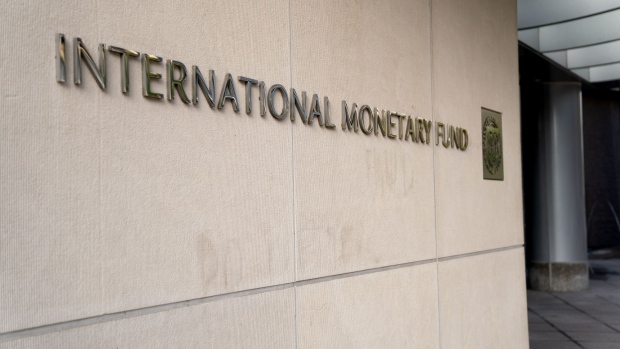 The International Monetary Fund in Washington, D.C., U.S., on Friday, Oct. 8, 2021. The Senate approved legislation Thursday that pulls the nation from the brink of a payment default with a short-term debt-ceiling increase, breaking a weeks-long standoff that rattled financial markets. Photographer: Stefani Reynolds/Bloomberg , Bloomberg

(Bloomberg) -- Argentine government officials will travel to Washington on Saturday to move talks forward with the International Monetary Fund for a new program after more than a year of conversations to replace a record deal.

A delegation of technical officials will aim “to continue advancing in technical understandings,” with IMF staff, according to a ministry statement on Wednesday. An IMF spokeswoman confirmed the upcoming meetings.

The officials traveling include the country’s representative to the IMF, Sergio Chodos, Economic Policy Secretary Fernando Morra, Finance Undersecretary Ramiro Tosi and Treasury Secretary Raul Rigo, according to a government official who asked for anonymity because the list wasn’t public. From the central bank, Jorge Carrera and German Feldman will attend.

Economy Minister Martin Guzman and Central Bank President Miguel Pesce are not expected to participate in the meeting.

After little progress over the past two years, Argentina is expected to ramp up negotiations ahead of a multiyear economic plan that President Alberto Fernandez said he would send to congress in December. The plan is expected to include “initial understandings” with the IMF that would serve as the basis for a deal with the lender. A precise date for when it will be submitted hasn’t been set yet.

The next few weeks are critical to shaping Argentina’s near- and medium-term outlook. President Alberto Fernandez expects to submit a new economic plan to Congress in early December. This should illuminate how the government intends to tackle high inflation, fiscal insolvency and unstable growth.

Fernandez wants to postpone over $40 billion in payments due from a record bailout given to the previous government of Mauricio Macri in 2018. However, he’s stalled on outlining a credible economic program, facing resistance from within his broad ruling coalition.

While the government continues negotiations, it intends to make a principal payment to the IMF of $1.8 billion due on Dec. 22, said Cecilia Todesca, Argentina’s secretary for international economic relations on Tuesday.