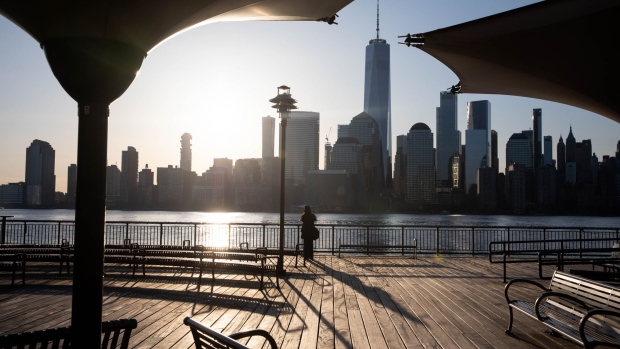 (Bloomberg) -- Archegos Capital Management’s implosion signals Wall Street has grown too complacent about potential threats building up in the economy, said Michael Hsu, the new acting chief of the Office of the Comptroller of the Currency.

“Banks do deserve credit for having weathered the pandemic fairly well,” Hsu, who Treasury Secretary Janet Yellen installed at the OCC this month, told reporters Tuesday. “There is a risk of a bit of overconfidence from that, to think that because everyone has done so well, they’re going to do well at everything as we enter a kind of growth phase.”

Hsu, speaking at a press briefing for the release of an OCC report that lays out possible dangers banks face, called Archegos a “flag,” for behavior that regulators need to be vigilant in monitoring. He laid out further concerns he has about industry risk-taking in testimony prepared for a Wednesday House Financial Services Committee hearing, highlighting hot Wall Street topics such as cryptocurrencies and special purpose acquisition companies, or SPACs.

Read More: A Glossary to Understand the Collapse of Archegos

The collapse of Archegos, trader Bill Hwang’s family office, was “reflective of at least some banks and firms having gotten complacent with regard to an activity which is generally fairly safe,” said Hsu, who was previously a top supervisor of lenders at the Federal Reserve.

The firm blew up in March after making massive, wrong way option bets on ViacomCBS Inc. and other companies. The failure contributed to more than $10 billion of combined losses for banks including Credit Suisse Group AG, Nomura Holdings Inc. and Morgan Stanley that financed Archegos’s wagers through their prime brokerage units, which lend money to hedge funds and other private investment firms.

While Morgan Stanley and Goldman Sachs Group Inc. did business with Archegos, they aren’t among the U.S. lenders regulated by the OCC.

In its risk report, the OCC also said U.S. banks remain threatened by problem loans tied to office and retail properties. With Covid-19 prompting tenants to rethink their “long-term space needs,” lenders may continue to struggle with commercial real estate, according to the document.

Hsu said he’s asked his staff to consider joining the Network of Central Banks and Supervisors for Greening the Financial System -- an organization that’s been focusing on dangers a warming planet poses to banks and other firms. The Federal Reserve said it joined the group earlier this year.

The Biden administration has so far struggled to permanently fill the OCC job, and Hsu is the third temporary comptroller since Joseph Otting, a Donald Trump appointee, left the agency a year ago. However long he stays, Hsu’s congressional testimony shows he has a detailed agenda for his tenure.

“At the height of the pandemic, most large financial firms avoided crypto-related activities and limited their exposures to Special Purpose Acquisition Companies,” he said in his prepared remarks. But due to client demands or fear of losing market share, some banks have started to “set aside their their initial risk management concerns and engaged with more risk imprudently.”

In his testimony, Hsu also made clear that the OCC has abandoned the so-called Fair Access rule that one of his predecessors tried to institute. The regulation would have banned banks from turning away any legally operated businesses just because they may be unpopular with segments of the public, such as gun manufacturers and oil companies.

Hsu also addressed the controversial chartering of financial technology firms as banks. While Hsu indicated that he’s not closing the door to such applications, he also signaled that he’s less enthusiastic about allowing tech companies to get into banking than Brian Brooks, a former acting comptroller who stepped down in January.

“We must find a way to consider how fintechs and payments platforms fit into the banking system,” Hsu said, adding that the solution has to be in coordination with the Federal Deposit Insurance Corp., Fed and the states.